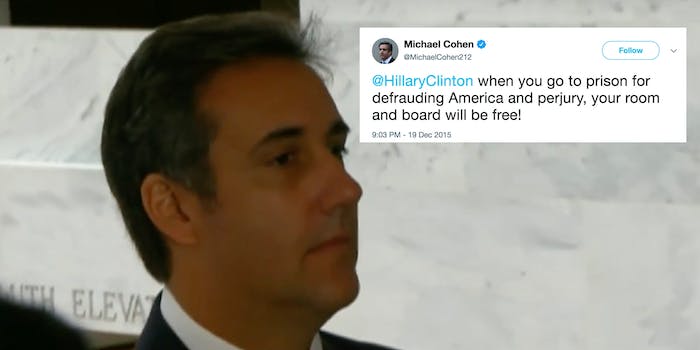 On the day of his plea deal, a 2015 tweet is coming back to haunt him.

As the old adage about the Trump White House goes, there’s always a tweet. This time, on the day of his plea deal, Michael Cohen’s own tweet about prison is coming back to haunt him.

News broke on Tuesday that Cohen, President Donald Trump’s longtime lawyer Michael Cohen, was expected to enter a plea deal with the federal government. Shortly after, the internet scrounged up a tweet from 2015 that certainly did not age well.

In the tweet, Cohen taunted then-presidential candidate Hillary Clinton: “When you go to prison for defrauding America and perjury, your room and board will be free!”

The internet, obviously, is basking in the irony—and taunting Cohen.

When tweets come home to roost …

Michael, when you're sitting in a prison cell, you'll wish you'd had another $130,000 to pay your lawyer.

The Washington Post reports that Cohen is likely to plea guilty to financial crimes including bank and tax fraud, plus a finance violation in regards to the 2016 election.

Luckily for Cohen, the same rules apply now to him as they would have to Clinton three years ago. That is, room and board in prison is still free!