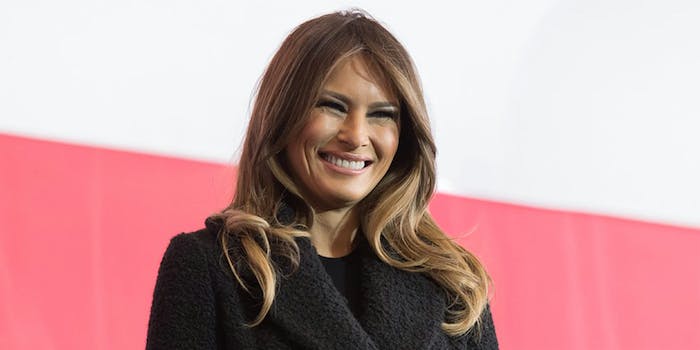 Melania Trump is reportedly the brains behind the Donald

Over the past year, much speculation hinged on whether Melania Trump secretly hated her husband, President Donald Trump. But a new book posits a wildly different interpretation of the First Lady’s role: secret White House savant.

Ronald Kessler, who is a Wall Street Journal reporter and friends with the president, has a new book out. It’s called The Trump White House: Changing the Rules of the Game, and in an excerpt published by the Daily Mail, Kessler wants people to know the overarching narrative about Melania is completely wrong.

She has an extremely uncanny ability to call out “bullshit artists” who are in it for “themselves.”

“Melania knows who the bulls*** artists are,” [former White House aide] Steve Bannon says. “She knows the promoters, the guys looking out for themselves.”

Of all the things thought about Melania Trump, discerning, non-nonsense handler of bullshitters kind of, sort of, utterly and completely conflicts with the other previously best-known thing about her: husband to America’s biggest bullshitter.

But, well, maybe she’s learned from the best?

That’s not all here that seems to be off. Despite her refusal to go to Washington at the onset of Trump’s presidency, Sean Spicer says she’s intimately involved in decisions (Spicer and Trump overlapped for less than two months in the White House, so take this one how you will as well).

“She is a very powerful behind-the-scenes force,’ Sean Spicer tells me. ”There are times when you’re in the room and see it, and she’ll weigh in on a decision, and it’s not just a yes or no. Instead, it’s, look, based on this scenario, here’s what makes sense.”

Trump’s White House has notoriously flailed about on almost every policy decision so… again… neat. How does she keep up with all the news, though? The same way we all do. By being online.

Melania reads widely, both publications and articles on the Internet.

The book also contrasts her with past first ladies like Laura Bush and Michelle Obama, saying Melania is much more involved in policy than either of those two women.

The one piece of advice Trump has never followed from Melania is her constant suggestion that he stop sending tweets to his forty million followers, the greatest number of any world leader.

“She would tell him that he shouldn’t tweet so much, put the Twitter away, just do not tweet,” Reince Priebus says. “No tweeting. Stop tweeting. Slow down on tweeting.”

Even the best strike out occasionally.