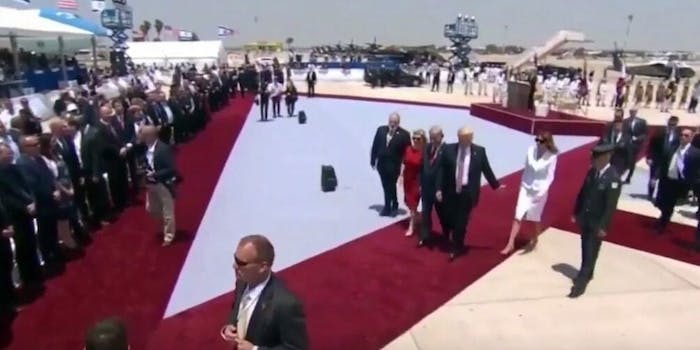 Adding more evidence to the idea that Melania Trump doesn’t much care for her husband, the first lady appeared to slap away the hand of President Donald Trump when he tried to touch her at the Israeli airport on Monday.

Need a closer look? Of course, you do.

As with plenty of other moments during President Trump’s four-month tenure as president, there’s just enough ambiguity here to make us wonder how the first lady really feels.

Earlier this month, Melania liked a tweet that made a joke about how crappy her marriage is, and on Mother’s Day, the world noticed that Donald Trump left her alone to go golfing and wondered if she preferred it that way.

Plus, there’s the famous Melania moment smiling at her husband during the inauguration before he turns away, which is when her face suddenly becomes an expression of what looks to be despair.

And though the video from Monday might have looked a little harsh—if she, in fact, was slapping away his hand—perhaps turnabout is fair play.