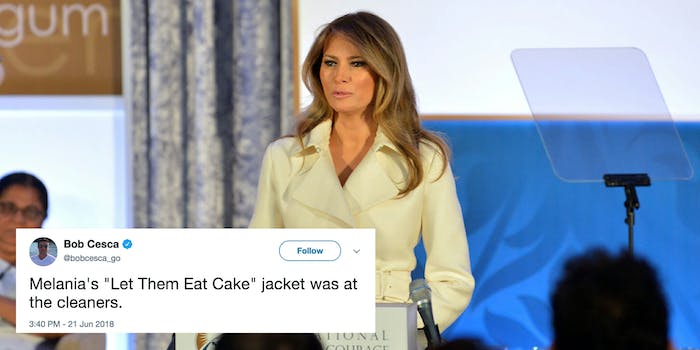 “I REALLY DON’T CARE, DO U?” If any one sentence sums up the sentiments of the Trump administration on its immigrant family separation policy so far, it’s this one.

The always-enigmatic first lady Melania Trump had those exact words scribbled on the back of her khaki green jacket as she—wait for it—boarded a plane to visit a shelter for immigrant children at the Texas-Mexico border.

Even beyond the weirdness of a millionaire ex-model donning a $39 Zara jacket, the choice seemed particularly inappropriate considering the flood of news coming out about her husband’s “zero-tolerance” immigration policy and its effect on families at the border.

After leaving Andrews Air Force Base in Maryland, Trump ditched the jacket for a different one before landing in McAllen, Texas. But to many, the damage was already done.

Some Twitter users drew comparisons between the coverage of the Obamas’ wardrobe choices and Trump’s fashion faux-pas. Others expressed pure outrage.

Here's why the "I really don't care" jacket worn by Melania Trump matters.

If either Obama went to a humanitarian crisis with messaging like this, right-wing America would've hammered them forever. pic.twitter.com/EsuzxoC4JE

GOP: HOW DARE SHE!

GOP: WHAT A CLASSY FLOTUS!

Melania's "Let Them Eat Cake" jacket was at the cleaners.

That last ounce of pull Melania Trump had to appear like the voice of reason or compassion just left the building…wearing a $39 jacket from ZARA.

President Donald Trump insisted the jacket was a stab at ‘Fake News Media.’

Melania Trump’s spokesperson, Stephanie Grisham, defended the first lady’s outfit and tried to steer the focus onto Trump’s concern for the families.

“It’s a jacket. There was no hidden message,” Grisham said, according to CNN. “After today’s important visit to Texas, I hope the media isn’t going to choose to focus on her wardrobe.”

She also maintained that it was the first lady’s idea to visit the Upbring New Hope Children’s Shelter.

Today’s visit w the children in Texas impacted @flotus greatly. If media would spend their time & energy on her actions & efforts to help kids – rather than speculate & focus on her wardrobe – we could get so much accomplished on behalf of children. #SheCares #ItsJustAJacket

Despite Grisham’s attempt to recenter the conversation, photos of the jacket rapidly spread across social media. Upworthy writer Parker Molloy mocked Trump with a series of photoshopped images that memed the outfit and made reference to several other scandals before ending with a call for political action.

Many users created their own versions of the meme, most of them trying to bring attention to other issues.

Made a new coat for Melania Trump. Hope she wears it. pic.twitter.com/AsJgo0Bavc

hey @FLOTUS I made something that's just your style pic.twitter.com/SbphgXZ4RY

Whatever her intentions were with the jacket, it’s clear that Trump has to learn that all of her actions have consequences—even if she doesn’t care.