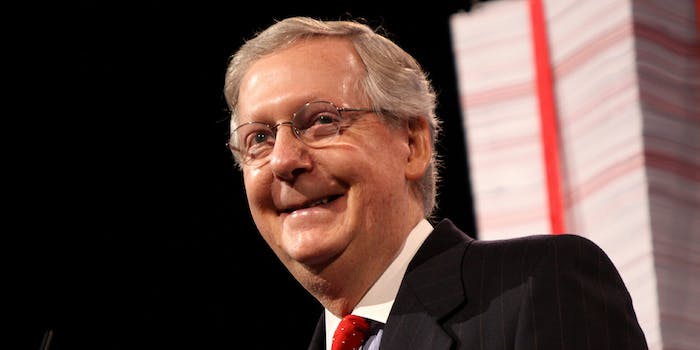 He doesn't think the president would fire him.

While a number of bipartisan senators have introduced a bill to protect Special Counsel Robert Mueller in the event President Donald Trump fires him, Senate Majority Leader Mitch McConnell doesn’t seem too keen on the idea.

“There’s no indication that Mueller’s going to be fired,” McConnell said. “I don’t think the president’s going to do that and just as a practical matter, even if we passed it, why would he sign it?”

Despite saying he would be “shocked” if the president fires Mueller—something that has been rumored after Trump’s personal lawyer, Michael Cohen, was raided by the FBI—McConnell said bluntly that it won’t factor into the Senate’s short-term plans.

“I don’t think he should fire Mueller and I don’t think he’s going to,” he said. “This is a piece of legislation that’s not necessary in my judgment… I’m the one who decides what we take to the floor, that’s my responsibility as the majority leader, and we’ll not be having this on the floor of the Senate.”

Earlier this month, Sen. Thom Tillis (R-N.C.), Sen. Chris Coons (D-Del.), Sen. Lindsey Graham (R-S.C.), and Sen. Cory Booker (D-N.J.) introduced a bill that would create a 10-day delay after any order to fire a special counsel to allow them to appeal the decision. The firing would then be reviewed by a panel of federal judges.

The bill would also ensure that documents and other material are not destroyed in light of a special counsel firing and make sure special counsels could only be fired for “good cause,” CNN reports.

While Trump may not fire Mueller, he could instead fire Deputy Attorney General Rod Rosenstein, who is overseeing the Russia investigation and special counsel because Attorney General Jeff Sessions recused himself.

You can read about Fox News’ interview with McConnell here.