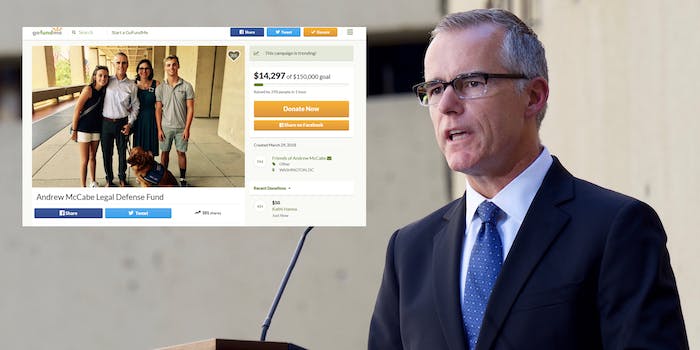 A GoFundMe has been created to help cover legal expenses for former FBI Deputy Director Andrew McCabe in the wake of his firing by President Donald Trump‘s administration just one day before he was set to receive his pension.

McCabe, who has drawn scorn from Trump on several occasions, was fired earlier this month after an inspector general report found that he failed to be “forthcoming” in an investigation into Hillary Clinton in 2016.

The GoFundMe seeks $150,000 because the “need for a legal defense fund is a growing reality.” The page mentions congressional inquiries, the Office of the Inspector General investigation, and “any potential lawsuits” the former FBI deputy director “might consider.”

As of Thursday afternoon, the page had raised more than $29,000.

“The support for Mr. McCabe has been overwhelming, humbling, and deeply appreciated,” the page reads. “He and his family continue to deal with the very public and extended humiliation that the Administration, and the President personally, have inflicted on them over the past year.”

Shortly after McCabe’s firing, Trump said it was a “great day for democracy.” In the past, Trump had criticized McCabe’s retirement plan and his wife’s connections to politicians close to Clinton. Trump also blasted Attorney General Jeff Sessions for not firing McCabe, who was named the acting director of the FBI following the president’s decision to fire former FBI Director James Comey.

You can check out the GoFundMe page here.