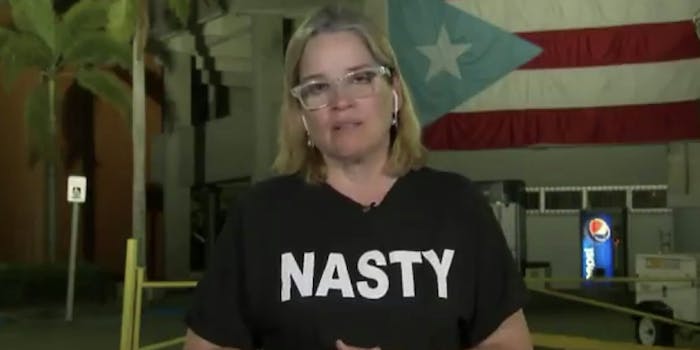 Mayor Carmen Yulin Cruz and Trump have clashed amid the response to Hurricane Maria.

San Juan Mayor Carmen Yulin Cruz wore a T-shirt with the word “NASTY” emblazoned on it during a television interview where she criticized President Donald Trump’s response to Hurricane Maria’s devastation of the United States territory.

Trump called out Cruz on Twitter last week, implying that she was being “nasty” to him. The “nasty” shirt is a reference to the president calling his presidential opponent Hillary Clinton a “nasty woman” during a 2016 presidential debate.

Can we get a round of applause for mayor of San Juan, @CarmenYulinCruz? #NastyWoman #PuertoRicoStrong pic.twitter.com/Yrxr5JfbVX

“The Mayor of San Juan, who was very complimentary only a few days ago, has now been told by the Democrats that you must be nasty to Trump,” Trump wrote on Saturday, amid a string of tweets about Puerto Rico.

In the interview with Univision, Cruz fought back at Trump, claiming that, “when someone is bothered by someone claiming lack of drinking water, lack of medicine for the sick and lack of food for the hungry, that person has problems too deep to be explained in an interview,” according to the New York Daily News.

“What is really nasty is that anyone would turn their back on the Puerto Rican people,” she said.

Trump visited the island on Tuesday and met with Puerto Rico officials. During his trip, Trump met with victims of the storm and tossed paper towels into the crowd from behind a table of supplies.

Trump also told officials that they can be “very proud” of the death toll since it was not as high as the death toll from a “real catastrophe like Katrina.”