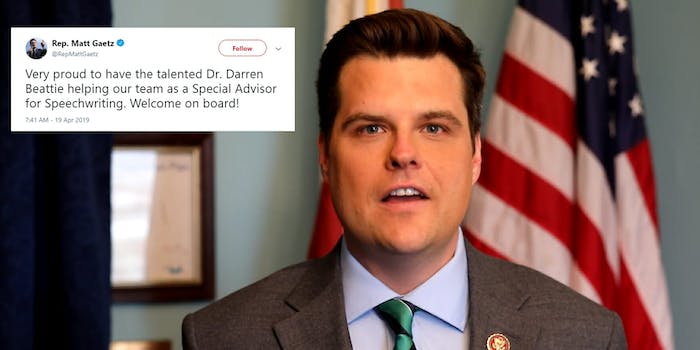 The speechwriter was fired by the Trump administration last year.

Rep. Matt Gaetz (R-Fla.) announced Friday that he hired a former speechwriter for President Donald Trump who was fired after he spoke at a conference that is regularly attended by white nationalists.

Darren Beattie was hired by Gaetz to serve as a special advisor for speech writing, the Florida lawmaker announced on Twitter.

“Very proud to have the talented Dr. Darren Beattie helping our team as a Special Advisor for Speechwriting. Welcome on board!” he wrote.

Very proud to have the talented Dr. Darren Beattie helping our team as a Special Advisor for Speechwriting. Welcome on board!

Beattie left Trump’s administration last year after CNN asked the White House about his appearance at the H.L. Mencken Club Conference in 2016.

The H.L. Mencken Club formed in 2008 and calls itself a group for “independent-minded intellectuals and academics of the Right.” Its conference has been attended by white nationalists in the past including Richard Spencer.

Gaetz told the Daily Beast he didn’t mind that Beattie attended the conference, and said he was not accused of saying anything questionable. Beattie told the Washington Post at the time that he did not say anything “objectionable.”