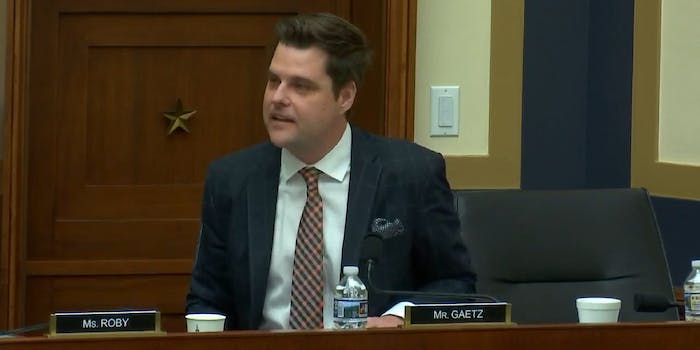 No, the claim doesn't make sense.

Rep. Matt Gaetz (R-Fla.) is no stranger to controversy. In fact, he’s constantly inviting more of it. During a committee hearing on the Equality Act, Rep. Gaetz criticized the bill by warning it would let President Donald Trump declare himself “the first female president.”

The comment came after Gaetz warned that the legislation would “nominally protect certain individuals while causing tremendous harm to others,” which, for those of you keeping score, is a subtle way of saying that trans rights threaten cisgender people. In particular, he feared the way the bill defined gender identity was “too vague” and would lead “all sex-based distinctions” to become “erased.” He also argued “bad actors” would “exploit the provisions of this law for their own gain.” That’s when he brought up his bizarre Trump reference, suggesting the president was one such example.

“Consider this possibility. If President Trump were to say ‘I am now the first female president,’ who would celebrate that?” Gaetz said during his statement. “Would those that support the legislation think that’s a good thing, or would they be dismayed?”

Rep. Matt Gaetz, during a hearing on transgender rights, wonders what would happen if Trump were to declare himself the first female president. pic.twitter.com/uYFheZVjUN

He then went on to warn that the bill “significantly and overtly undermines religious freedom,” would “chill freedom of speech,” and that it undermines “women’s rights.” But it was his comments on Trump that caught Twitter’s attention. After Yahoo News’ Alexander Nazaryan shared a clip of Gaetz’s remarks, it quickly went viral.

“It’s like Matt Gaetz is in a contest with [Rep. Louie Gohmert (R-Tx.)] to be the dumbest member of Congress,” author Molly Jong-Fast said, quotetweeting Nazaryan’s video.

It’s like Matt Gaetz is in a contest with Louie Gohmert to be the dumbest member of Congress. https://t.co/Mj6fpzTIXb

This is not a choice, it’s not the punchline to some joke. You’re endangering people’s lives. #TransRightsAreHumanRights https://t.co/q1J9gu1Ygo

He'd grab his own pussy

Well if trump did that, we'd refer to her as Madame President and work just has hard to get her TF up out of office for promoting racism and bigotry while advancing "policy" agendas that harm Americans most at risk…

Others were quick to debunk Gaetz’s points, arguing that the Equality Act wouldn’t threaten women, religious communities, or small children. But then again, Gaetz is more interested in siding with his fellow Republicans than saying anything accurate.

“On one hand, Gaetz *could* note that in any of the MANY states with explicit trans protections there haven’t been issues like he’s described,” Media Matters Editor-at-Large Parker Molloy tweeted, “but he doesn’t really give a shit. He’s just an asshole.”

@mattgaetz – You really don't get what this is about, do you. Our brains are literally hardwired this way. This is not dress up or a fetish. This is about millions of American simply wanting the same rights and privileges you have. We're here! We Exist! We're not running! pic.twitter.com/UPqqRevdhN

For the record, it’s incredibly unlikely Trump would transition genders just so he could become “the first female president.” Gender dysphoria is an incredibly debilitating experience for trans people, and presenting as a gender that contrasts from one’s own can be uncomfortable for cisgender people, too. Trans feminist academic Julia Serano tackles this on her website’s terminology section, explaining how affirming, inclusive approaches to gender identity are important for young kids.

“For children, a gender-affirming approach involves accepting and supporting their self-understanding of gender, whether it be cisgender, transgender, binary, non-binary, or questioning,” Serano writes, warning that research on gender-disaffirming treatment for children are “associated with many negative outcomes with regards to self-esteem, life satisfaction, PTSD, suicidal thoughts, and mental health more generally, whereas gender-affirming approaches are associated with more positive outcomes.”

Unless Trump already had an ongoing desire to live his life as a woman, presenting as one would probably be incredibly painful and dysphoric, ironically enough.

So no, Rep. Gaetz. The “bad actors” claim is just a myth—even if Trump is the textbook definition of one in other contexts.