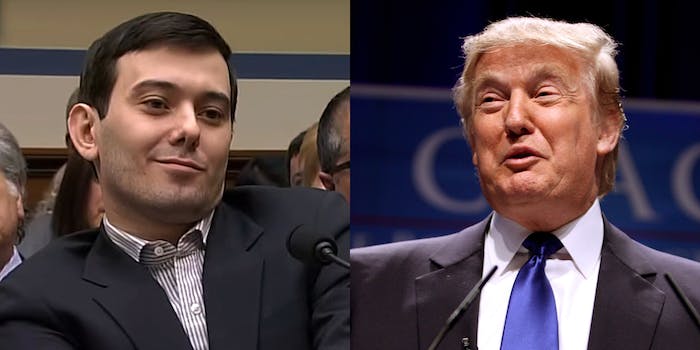 The feeling is not mutual.

Still undecided about who to vote for in November? Perhaps the most hated person in America can help sway you.

Martin Shkreli—infamous for jacking up the price of a life-saving drug by 5,000 percent, buying a one-of-a-kind WuTang album, allegedly cheating esports players out of payment, and getting arrested by the FBI on securities fraud charges—tweeted on Friday that he’s supporting Donald Trump.

Shkreli even mustered the energy to tweet out a positive message to those who aren’t on Team Trump.

While Trump and Shkreli have both developed reputations for offending wide swaths of the American public, the presumptive Republican nominee doesn’t exactly see eye to eye with the Pharma Bro.

“This young guy raised the price to a level that’s absolutely ridiculous and he looks like a spoiled brat doing it,” Trump said at a Columbia, South Carolina, press conference in September. “You want to know the truth? He looks like a spoiled brat. And he’s a hedge fund guy—as you know, the only one who I’m raising taxes for. They’re going to be paying up. But I thought it was a disgusting thing what he did.”

A spokesperson for Trump’s campaign did not respond to an email asking whether the candidate’s views on Shkreli have changed over the past seven months.