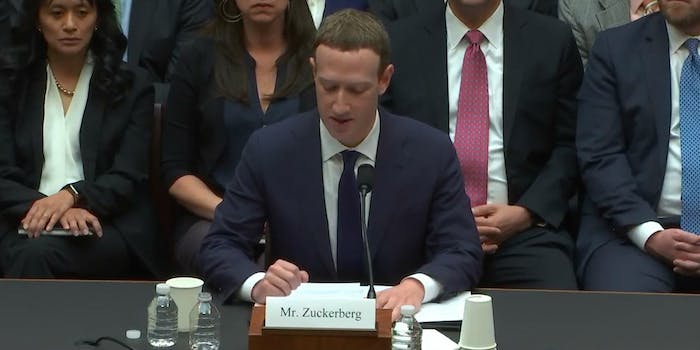 The irony is rich.

Mark Zuckerberg was ready to lay into Apple and its CEO Tim Cook during his two-day testimony before Congress, according to photos of his notes, which were apparently not too hard to get a glance at.

And for the behind the scene – here: https://t.co/P54asJlh1P

We have AP photographer Andrew Harnik to thank for stealthily snapping a high-res photo of two pages from Zuckerberg’s notes that offer more juicy details than the entire five-hour marathon hearing before the Senate on Tuesday. After zooming and enhancing, you can clearly see a section dedicated to potential questions about how Apple supposedly keeps its user’s data safe. Sadly, as of writing, no lawmaker made any mention of the tech giant.

It comes as no surprise that Zuckerberg would be eager to hit out at the smartphone manufacturer after Cook ripped Facebook last week for its failure to protect user privacy. Cook, who supports government regulation for online privacy, said Facebook’s situation was particularly “dire.”

“I think that this certain situation is so dire and has become so large that probably some well-crafted regulation is necessary,” Cook said. “The ability of anyone to know what you’ve been browsing about for years, who your contacts are, who their contacts are, things you like and dislike and every intimate detail of your life—from my own point of view, it shouldn’t exist.”

In an interview with Recode and MSNBC, Cook said he “wouldn’t be in this situation” when asked what he’d do if he were Zuckerberg.

Zuckerberg was prepared to echo his previous response to Cook’s jabs by explaining how Facebook attempts to connect the world by offering a free service, unlike Apple and its $1,000+ devices.

“But if you want to build a service which is not just serving rich people, then you need to have something that people can afford,” Zuckerberg said in an interview with Vox.

He was also ready to bring up “lots of stories about apps misusing Apple data” as reasons for Congress to treat all services equally.

Another section of his notes gives prepared answers for questions about a potential resignation: “Resign?: Founded Facebook. My decisions. I made mistakes. Big challenge, but we’ve solved problems before, going to solve this one. Already taking action,” the notes read.

Mark Zuckerberg takes his notes with him this time as he leaves during a brief recess. https://t.co/nzspkRQ5Lw pic.twitter.com/2MYGuGSmJi

During his second hearing before the House, he was seen snatching his binder during a short recess, a glimmer of hope that Zuck is learning the importance of protecting data.