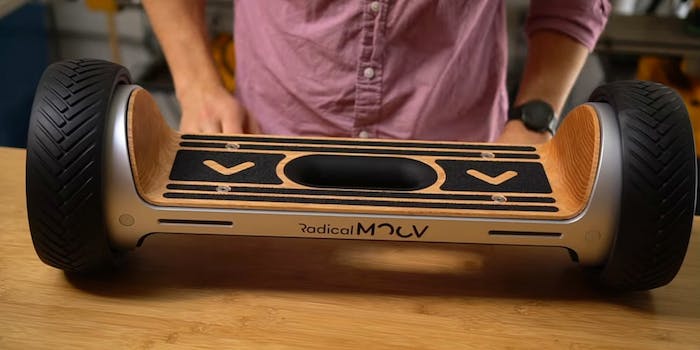 Mark Cuban wants to revitalize the ‘hoverboard’ industry with his $1,100 Radical Moov

The 'electric rideable' is campaigning on Kickstarter. It is expected to retail at $1,500.

The hoverboard is back, and we can finally stop calling it by that terrible name.

Mark Cuban’s Radical Moov may look and function like the hoverboards of old, but its developers want you to know it has very little in common with those combustable contraptions. In fact, Radical Transport is marketing its Kickstarter device with the hashtag: #unhoverboard.

What makes the Moov different? First, it’s designed and assembled in Dallas, unlike the dozens of banned hoverboards that were thrown together in China using the same mold and variations of the same parts. It also has a unibody design crafted out of aluminum and oversized wheels for added durability. And unlike its predecessors, the Moov, which can go up to 15 miles per hour, moves by sensing how you shift your weight, instead of making you to push one foot forward or back.

These differences give Radical Transport the right to call its (un)hoverboard an “electric rideable.” I’m not convinced the name sounds any better, but it at least skirts the poor reputation left behind by its failed predecessors.

The Radical Moov is the brainchild of billionaire businessman and Sharktank star Mark Cuban. As Mashable points out, Cuban became interested in hoverboards back in 2012, and tried to buy Hovertrax from Shane Chen, the creator of the first hoverboard. When the deal didn’t go through, Cuban decided to create Radical Transport.

“It’s fun. It looks amazing. It’s durable. It’s powerful. It can be transportation or sport. It works,” Cuban told Mashable. “We don’t have to sell millions of them to make this a great business.”

The Moov isn’t a solution for people looking to purchase a rideable without breaking the bank. It is currently campaigning on Kickstarter starting at $1,100, and could list for $1,500. That is more than twice the price of Segway’s well-received mini-Pro.

Despite its price, the Moov is already halfway to its $50,000 goal after just one day of crowdfunding.