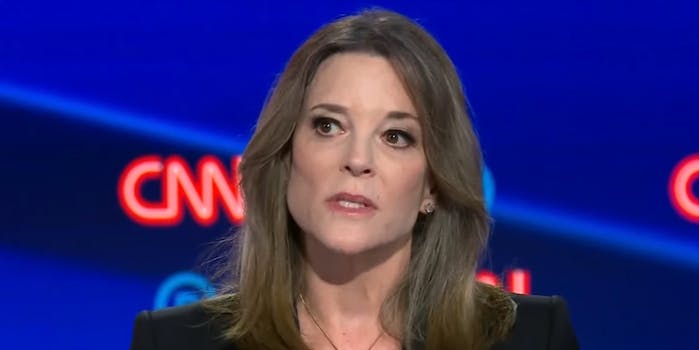 The proposed agency has a wide mandate.

Marianne Williamson, the author and spiritual guru running for president, unveiled her proposal for a “Department of Peace” within the United States government on Monday night.

The agency would use “proven powers of peace-building” and work with all branches within the government. It would focus on issues including: addressing gun violence, combating white supremacy, preventing armed conflict, and coordinating “restorative justice programs.”

“I believe our country’s way of dealing with security issues is increasingly obsolete,” Williamson said in a statement. “We have the finest military force in the world, however, we can no longer rely on force alone to rid ourselves of international enemies. The planet has become too small for that, and in so doing, we overburden our military by asking them to compensate for the other work that we choose not to do. We are less effective, and less secure, because of those choices.”

Earlier this month, Williamson told CBS News that she wanted to create the Department of Peace when asked about the pair of deadly shootings that killed more than over 30 people in El Paso and Dayton.

“What I want, and what I’ve talked about in my campaign is the establishment of the United States Department of Peace. You can’t just fight violence. Violence is the absence of peace,” she said. “We have to face the fact that our society is violent. What has happened here and what are our policies? Do our polices serve just short term economic issues or do they serve humanitarian issues? Because when people are happy, that’s where you have the greater peace.”

Williamson said the new department would work with cities, counties, and states on a domestic level and assist governments around the world with “peace-building support” and humanitarian assistance.

Williamson is polling at 1 percent among the wide fray of candidates vying to take on President Donald Trump in 2020, according to Real Clear Politics.