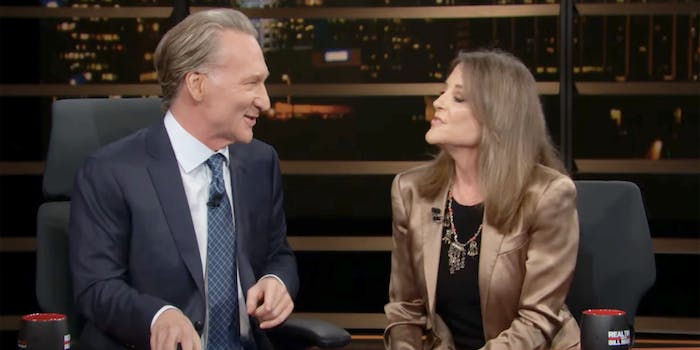 Bill Maher and Marianne Williamson are two peas in a pod, apparently

The 'Real Time' host seemingly agreed with his guest on 'everything.'

It is with a heavy heart that we inform you Bill Maher is being problematic, again. On Friday night, the host welcomed 2020 presidential candidate Marianne Williamson onto his show, Real Time with Bill Maher, where he lavished the spirituality guru with praise in an overwhelmingly fawning interview. And, predictably, got called out for it later.

Right off the bat, Maher gushed that Williamson was “too interesting to run for president,” before congratulating her on being the most Googled candidate following this week’s presidential debates. Williamson did indeed get people talking with her impassioned defense of the Flint water crisis–however, her pseudoscience and new-age positions on modern medicine continue to worry her detractors. Maher made sure to bring this up.

“Alright, so, mental health … now again, I’m with you on this,” he said, before launching into a diatribe on a recent New York Times article for negatively characterizing her views on medicine.

“I agree with everything,” Maher said, defending his guest. “Mrs. Williamson has criticized the widespread use of antidepressants … I’m down with that!”

“[You] called the distinction between ordinary sadness and clinical depression artificial,” he continued. “I think that’s a bit of a mischaracterization, but you do say yes, we over-prescribe these drugs and sadness is a part of life. You don’t always need a pill, isn’t that your basic thrust?”

“There is a spectrum of normal human despair. Someone that you loved died, you went through a divorce, you had a bankruptcy or a financial failure … There are all sorts of severe disappointments in life, but they’re not a mental illness,” she said.

Maher later closed out the show by issuing a stern warning to Democrats, essentially to not “fuck this up” in 2020. He joked several times over the course of the six-minute segment that he personally had spent the past month using marijuana to cope with Donald Trump’s presidency.

Noting the poor approval rating for a president during a good economy, Maher suggested that moderates with Trump fatigue might vote against the economy just to get back to some semblance of normalcy. But, he warned, “they won’t trade it away for left-wing extremism.”

“All the Democrats have to do to win is to come off less crazy than Trump, and, of course, they’re blowing it,” he quipped. “Coming across as unserious people who are going to take away all your money so migrants from Honduras can go to college for free and get a major in ‘America sucks.'”

Between endorsing a fringe candidate, while calling her opponents “crazy,” and denouncing prescription antidepressants, while boasting about his own use of recreational drug use to combat anxiety, it would appear that Maher has really outdone himself. Plenty of people on Twitter were more than happy to point that out.

“You're too interesting to run for president.”

“I agree with everything.”

Bill Maher and Marianne Williamson discussing the fact that people don't really need antidepressants. To both I say pic.twitter.com/RPiHeOnZ7A

How can Bill Maher be against anti-depressant when he smokes weed every day just so he can cope? https://t.co/Dw4Y3LJ0Gv

Depression is not "sadness." It's not a bad mood or a temporary lack of happiness.

It is dread. It is worry, stress, and fear. It's good times being ruined by horrible thoughts and bad times amplified tenfold.

I wouldn't wish my depression on my worst enemy. Fuck Bill Maher.

With all that was said, it was nearly overlooked that Maher also said that he hopes for a recession to boot Trump out of office.

Bill Maher: “I’ve been hoping for a recession – people hate me for it – but it would get rid of Trump.”

Josh Barro: “Recessions are really bad. People lose their jobs and homes and we shouldn’t wish for it.”

Maher: “I know. It’s worth it.” pic.twitter.com/Ysc2LhHbs2

Bill Maher wants a recession so that it would hurt Pres. Trump

Even when told that it would hurt Americans, his answer is:

“I know. It’s worth it.” pic.twitter.com/fOikaK53KI

Others are just wondering why, in 2020, anyone cares what Maher has to say in the first place.

*Reads why Bill Maher is trending*

Everyone to bill maher the minute he says anything pic.twitter.com/kLqZh2OCR7

How we’re this far into cancel culture and somehow Bill Maher is still out there, blasting his problematic opinions, is anyone’s best guess.