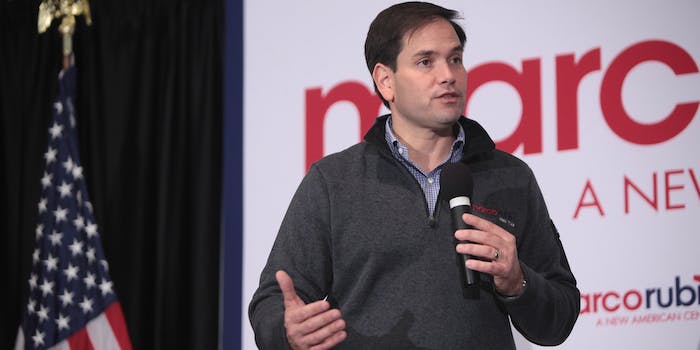 Rubio joined another senator's effort to stop the NSA from deleting the old data.

Congress ended the metadata program and eliminated the “lone wolf” and “roving wiretap” powers when it passed the USA Freedom Act in June. Pursuant to that law, the metadata program officially ended on Sunday at midnight. The NSA must now get a warrant and ask phone companies to provide specific phone records, although it still has another way to collect bulk records.

Cotton introduced the first Liberty Through Strength Act last month to delay the end of the primary metadata program, but it did not get a vote in time.

The roving-wiretap provision lets the government use one warrant to track a suspected terrorist as he or she switches electronic devices, rather than obtaining separate warrants to surveil each device. The lone wolf provision lets the government treat each suspected terrorist as equivalent to an “agent of a foreign power” for investigative purposes.

“Our intelligence professionals are our first line of defense, and by taking effective tools away from them they are less able to connect the dots needed to prevent foreign operatives from entering our country and also defend against homegrown radicalism that can lead to lone wolf terrorist attacks,” Rubio said in a statement.

The NSA obtained permission from the Foreign Intelligence Surveillance Court to retain old metadata collected through its program for technical testing purposes and to comply with pending litigation over the program. Once that lawsuit is resolved and the technical analysis window has ended, the NSA will delete the metadata. Cotton’s new bill would prevent that from happening.

A federal appeals court ruled in May that Section 215 of the USA Patriot Act, used as the basis for the metadata program, never actually authorized that operation, and a presidential review group concluded in December 2013 that “the information contributed to terrorist investigations by the use of Section 215 telephony metadata was not essential to preventing attacks and could readily have been obtained in a timely manner using conventional Section 215 order.”

Rubio has turned the USA Freedom Act, the most significant surveillance-reform legislation in decades, into an issue on the 2016 campaign trail. He has blasted fellow candidates Sens. Ted Cruz (R-Texas) and Rand Paul (R-Ky.) for voting for the bill and repeatedly said that it will make America less safe.