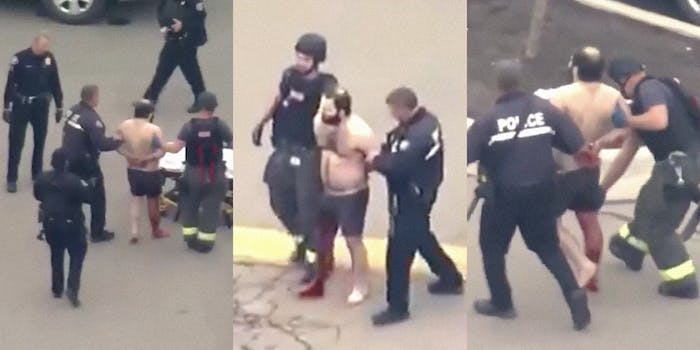 Ten people were killed in a Monday afternoon mass shooting in a Boulder, Colorado grocery store.

The shooting was still in progress when an eyewitness began livestreaming.

The video shows three motionless bodies on the ground, the arrival of police and first responders, and includes footage of a handcuffed man with a bloodied leg being loaded onto a stretcher. The shirtless, shoeless man was clad in only what some outlets have reported were his underwear.

Police identified the shooter as 21-year-old Ahmad Al Aliwi Alissa and confirmed that he was male and was injured in the shooting, which claimed a police officer’s life.

In the beginning of the video, Schiller films two motionless bodies on the ground outside the store. He asks someone if they saw where the shooter went. “He went in there,” responds the person, who appears to be a store employee.

Schiller then walks inside, filming another person lying prostrate and motionless. “Oh, my god. Guys, we got people down inside King Soopers,” he says, referring to the store.

Police have not yet released victims’ names, other than the officer, Eric Talley.

Two more gunshots are then heard. Schiller exits the store and films from the parking lot.

Many on social media have taken issue with Schiller’s actions.

Schiller has thus far not commented.

Police and security experts urge people to refrain from entering an active shooting situation for any reason.

“If you’re just a civilian and not an authorized first responder and you really want to help, the best thing you can do is observe and report to 911 from a safe distance,” Matthew Johnson, director of training at Cohen Security, which provides active shooter trainings, told Insider.

Police repeatedly urge Schiller to move back for his own safety. He tells one to “fuck off.”

YouTube has policies against allowing videos of violence and corpses. In this instance, the company has reportedly decided to make an exception based on newsworthiness. It told Insider that it is monitoring the situation.

YouTube has placed an age restriction on the video, which remains live as of this writing. It has nearly 600,000 views.