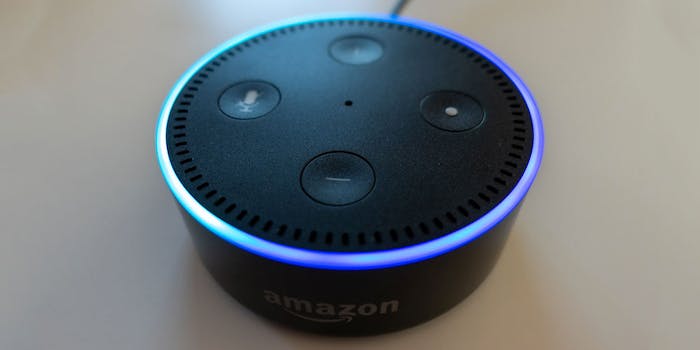 Police say the technology may have inadvertently saved the women's life.

A New Mexico man was taken into custody after an Amazon Echo device called the police during an alleged domestic violence incident.

Police say 28-year-old Eduardo Barros got into a physical altercation with his unidentified girlfriend following an argument at a Tijeras residence just outside of Albuquerque on July 2.

Barros, who is also accused of threatening to kill the women while in possession of a firearm, allegedly asked her if she had contacted law enforcement.

“Did you call the sheriffs?” Barros reportedly questioned.

An arrest warrant affidavit obtained by The Post indicates that 911 contacted the female moments later, prompting Barros to throw her to the floor after seeing emergency services on her phone’s caller ID.

“Barros then kicked her while on the ground at least 10 times in the face and stomach,” the affidavit states.

A SWAT team was dispatched to the residence and eventually took Barros into custody following a stand-off with a crisis negotiation team.

The female sustained minor injuries but was not taken to a hospital. The female’s daughter, who was present during the incident, was unharmed.

Bernalillo County Sheriff Manuel Gonzales told ABC News that the situation could have ended much worse if not for the Amazon device.

Barros, a convicted felon, has been charged with multiple crimes, including possession of a firearm, aggravated battery, and false imprisonment.

While the case highlights an instance in which such technology can potentially be lifesaving, virtual assistants have raised concerns over their invasive nature. Just this week it was revealed that contractors were listening in on audio recordings gathered by Google’s virtual assistant. Amazon employees are doing the same for audio collected by the Echo device as well. Both companies argue that listening in on users is necessary to improve the accuracy of their respective devices.