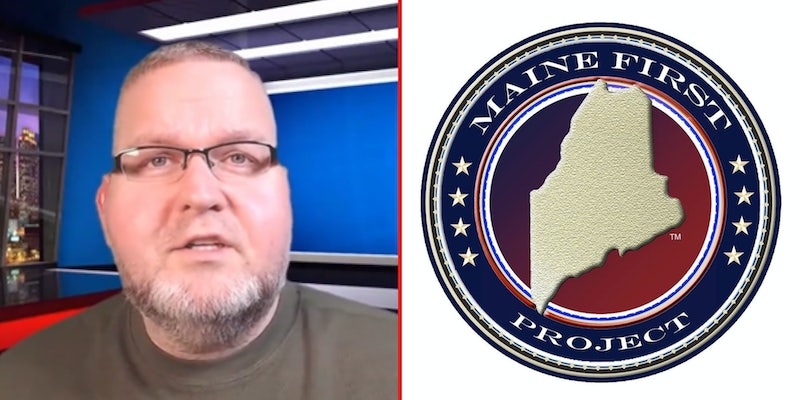 One of its top leaders has also been banned from multiple schools.

“This is vulgarity,” someone interrupted. “…I’m going to ask you to shut the video off.”

In its rush, though, to fearmonger about child predators at school, it teamed up with someone convicted of having lewd and lascivious contact with a child under 16.

The anti-grooming party, it appears, accidentally platformed a sex offender.

But however controversial its methods, no one can deny the effectiveness. The state GOP has embraced Maine First Project.

Andy O’Brien, communications director of the Maine AFL-CIO, told the Daily Dot that Lockman has a decades-long history of bigoted activism.

“He was always kind of like a fringe character,” said O’Brien, who describes Lockman as racist and homophobic.

Lockman was emboldened by Maine electing Republican Paul LePage governor a decade ago, O’Brien says. LePage drew controversy for saying “Black people come up the highway and they kill Mainers” and that heroin dealers often “impregnate a young white girl.” He’s running for governor again and won the Republican primary in March.

Lockman served in the Maine House of Representatives from 2012 to 2020. Sen. Susan Collins (R-Maine) endorsed his first campaign. Collins publicly distanced herself from him in 2018 when he claimed there was a “war on whites.”

Maine First Project remained largely relegated to the margins until the last few years when it emerged as a prominent voice in Maine Republican politics. It accomplished this feat in part with its wild, attention-grabbing fear-mongering about LGBTQ people, civil rights, and immigrants, dovetailing with the post-pandemic right-wing culture frenzy.

Messaging like this has earned the group and its founder approval from top Republicans in Maine and beyond. Two years ago, LePage stood by Lockman’s side when the latter announced a run for office, which he lost. Last year, McBreairty appeared on Tucker Carlson’s show to discuss CRT, which he described as “anti-white training.”

Former President Donald Trump’s director of Customs and Border Protection spoke at an event the group hosted in April.

Also in April, it had a prominent presence at the Maine Republican Party convention. Delegates there unanimously voted to amend the platform to include the group’s proposed amendment to ban CRT and sexually based material from schools. Critics say that CRT isn’t taught in Maine schools and that the amendment’s prohibition of teachings related to sex, which applies up to the 12th grade, potentially prohibits sexual education of any kind. The party didn’t respond to an emailed inquiry sent late last week about Maine First’s influence.

Bangor Daily News reports that McBreairty accused the Maine 2022 teacher of the year of promoting CRT because a reading list she compiled for students included works by LGBTQ and minority authors.

No consequence seems to have any effect on its strategy.

“My hope is that this summons is a reality check on his behavior,” the chair, Tyler McGinley, told the outlet.

“I wanted to make sure that if the harassment was going to continue to happen, it wouldn’t happen to other people.”

The conviction doesn’t appear to have had any effect.

Earlier this month, a different Maine school district filed suit against McBreairty for harassing and bullying one of its teachers, whom he reportedly accused of “grooming children” and called a “sexual predator.”

McBreairty didn’t reply to a request for comment sent via email by the Daily Dot.

Though the group isn’t named in the suit, Maine First Project is fundraising for McBreairty’s legal defense.

Lockman didn’t respond to questions about the charges, lawsuit, and schools banning McBreairty.

O’Brien of the Maine AFL-CIO says that stunts like these are central to Maine First Project’s commitment to attracting attention.

“He [goes] to these school boards and read sex scenes … then he acts like he’s being censored,” O’Brien said, opining that McBreairty is hoping to get on Carlson’s show again.

O’Brien said that they also often target women, particularly women of color. The teacher the school district accuses McBreairty of harassing and defaming is a woman. So is the teacher of the year he accused of promoting CRT.

Some believe that platforming a registered sex offender will finally prove to be a bridge too far for some of Maine First Project’s supporters, possibly even the Maine Republican Party.

In April, McBreairty’s podcast featured David Arthur Kendall, who describes himself as a former transgender woman and former prostitute. “Changing sex is not an option,” his website says. He describes being transgender as a type of “confusion” or “mental disorder”—a compelling story for transphobic groups like Maine First Project.

McBreairty subsequently returned the favor by appearing on Kendall’s podcast.

A Maine-based researcher who goes by Mooncat (@HeemanFragbard) on Twitter told the Daily Dot that something about Kendall struck him as odd. Mooncat, who the Daily Dot agreed to give anonymity, did some digging. Mooncat learned that Kendall, who goes by David Arthur, is a registered sex offender with a criminal history that includes arrests for prostitution.

The Daily Dot independently verified that Kendall is on the sex offender registry. Court records and the registry state that Kendall was convicted of a sex offense against a child in the 1990s. After Mooncat reported it, Kendall blogged about being a sex offender, admitting that he slept with underage boys while he worked as a prostitute.

“It appears their relationship has been established for a while now,” Mooncat tweeted of McBreairty and Kendall, adding that Maine First Project “shared the interview in multiple channels.”

McBreairty didn’t respond to request for comment about his affiliation with Kendall.

On his podcast, McBreairty and Kendall discussed the latter’s time as a transgender woman, which they tied back to the “fight to expose the evils in these Maine K-12 government-run schools.”

Lockman denies having any working relationship with Kendall. “Maine First Project has absolutely no relationship or affiliation whatsoever with David Arthur Kendall, or David Arthur, or whoever. I don’t know him, I’ve never met him, I know nothing about him,” he told the Daily Dot via email.

Lockman didn’t respond to a follow-up inquiry that included a screenshot of Maine First Project promoting Kendall’s appearance on McBreairty’s podcast on its Facebook page on April 15.

“We dive deep into the transitioning cult that is taking your students’ minds and tearing them apart with mental illness,” the group wrote of the episode.

On a live stream on May 19, Kendall denied that Maine First Project sponsored his trip to speak to a school board meeting hours from his home. He acknowledged working with the group and McBreairty, but said he doesn’t know Lockman.

“I am not affiliated with Maine First Project at all,” Kendall, who is gay, told the Daily Dot via email. “I do not know Larry Lockman, and I honestly don’t want to.”

“If I would’ve done my own due diligence and looked into who I was getting involved with, I most likely never would’ve been on their podcast.”

Kendall said he stands by his claim that being transgender is a mental disorder, but takes issue with Lockman because “the man thinks that I am a deviant predator just because I am gay and that would be without being on the registry.”

“I am guessing Shawn probably feels the same way although he tried to make it seem like he didn’t when we talked on the phone.”

Kendall said he was asked to speak at the school board as a result of becoming associated with Maine First Project, but that this is likely the “first and last” time he’ll speak at a school board meeting in Maine. He said he feels essentially abandoned by the very people who suggested he speak, whom he declined to identify.

At the meeting, reported on by the County, he shared his view that the LGBTQ movement is dangerous to children, and can prematurely sexualize children and cause gender confusion.

“Please let these children know it’s OK to be gay,” Kendall said. “They don’t have to run into the arms of a rainbow movement that is bound to destroy them, body and soul.”

Those who’d embraced him with open arms turned their backs when the full extent of his past came to light.

“None of the ones that encouraged me, asked me, helped me etc … to go to the school board meeting and put myself out there like that have stopped to stand up for me, speak up for me, defend my position or explain what they know of me,” he told the Daily Dot.

Maine First Project has proven that there appear to be little lengths it won’t go to, or people it will use, to push Maine as far right as possible.

Even if those people are guilty of the exact same crimes they’ve been railing against.