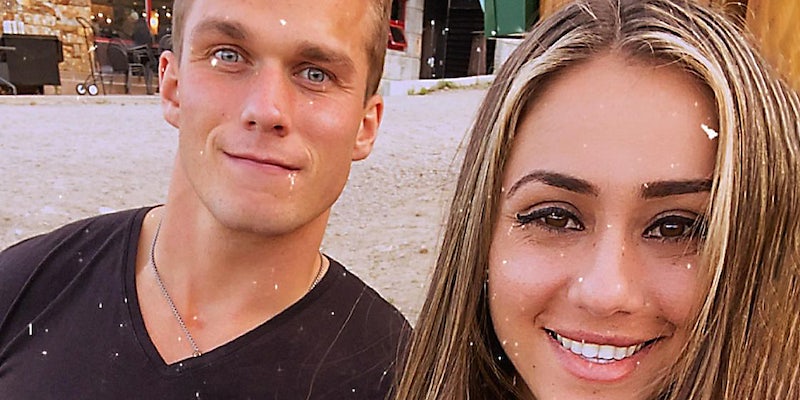 The tale includes a Russian casino and a fake CrossFit competition.

Earlier this month, Rep. Madison Cawthorn (R-N.C.) revealed that he and his wife are splitting after seven months of marriage. The story attracted relatively little interest.

A resurfaced clip of Cawthorn talking about how the pair met has turned far more heads than their breakup. People are speculating that the circumstances may even be a national security concern. Cawthorn has characterized the accusations as outrageous and false. There’s no evidence that the speculation is anything but that.

Left-leaning conspiracy theorists wasted no time leaping on the rumors, however. In their minds, Cawthorn’s ex is a foreign spy and he is her target. This theory doesn’t make a lot of sense and there’s no evidence other than the admittedly strange circumstances of how and where they met to back it up.

In an appearance on the Daily Caller, Cawthorn said that he met an American Army captain in a Russian casino while on vacation.

“We hit it off, created a really great relationship, and stayed in contact for about a year and a half.”

Later, while in Miami, Florida, the Army captain invited him to participate in a CrossFit competition.

“It all was a sham. It was a fake CrossFit competition. He just wanted to put me in the same room with the girl who was eventually going to be my fiancée,” Cawthorn said.

“We did. Her and I hit it off. And it’s been a magical relationship ever since.”

“This does not sound a normal meet-cute story whatsoever. Very few of these stories involving Russia are,” Stern added.

“Here he describes when he was recruited in St. Petersburg Russia by a guy who set up a fake CrossFit competition to set him up with his future wife,” tweeted Jim Stewartson.

Frank Figliuzzi, former assistant director of the Federal Bureau of Investigations, tweeted, “I have questions.”

“Who stages a CrossFit competition to introduce friends?” wondered another Twitter user.

Many drew parallels to Rep. Eric Swalwell’s (D-Calif.) relationship with a woman suspected of being a Chinese spy.

Swalwell was not accused of any wrongdoing and reportedly cut contact with the woman immediately after being formed of suspicions that she was a spy. Several pointed out that Cawthorn mocked Swalwell over the incident from several years back that came to light last year.

As the rumors persisted, people began pointing out other details in the story that they feel don’t quite add up. For example, gambling and casinos are illegal in most of Russia, including St. Petersburg.

“There are zero casinos in Saint Petersburg. There are a few casinos in Azov which is over 1,200 miles away, but gambling is illegal everywhere else. Why is he lying?” tweeted one. Someone replied that he may have gone to “an illegal casino.” It’s also possible that he took a gambling ferry to St. Petersburg and was simply mixed up.

Much of the so-called evidence against Cawthorn is based on a mix of assumptions and half-truths. For instance, while a tourist visa is generally required to travel to Russia, as some said, there is a ferry that allows people to travel from Sweden to Russia without one.

His story of how they met having some inconsistencies or embellishments doesn’t establish that there was anything nefarious about it, no matter how much some may like to frame it as such.

“Left-wing losers still bitter over their debunked Russia Hoax are spreading lies about me,” he tweeted.