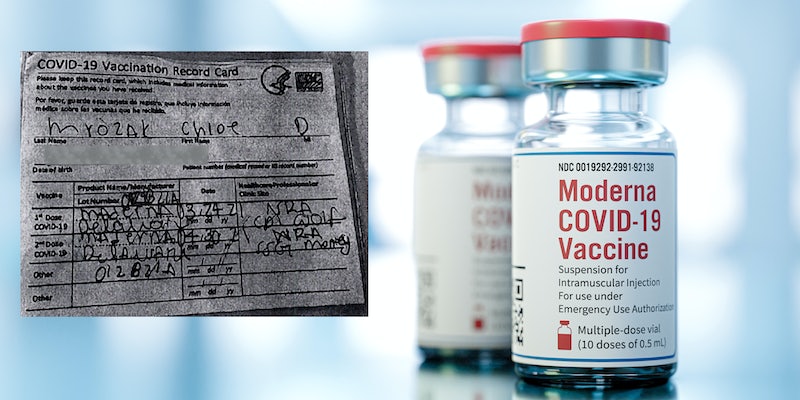 'Well… she probably chose Maderna because she knew she couldnʻt spell Fizur.'

A 24-year-old woman was arrested in Hawaii after she tried to use a fake vaccination card that said she received the “Maderna” COVID-19 shot, misspelling the name of the actual vaccine.

Chloe Mrozak, of Illinois, was arrested after an administrator for Hawaii’s Safe Travels Program, which requires vaccination to enter the state, noticed a possible fraudulent vaccination card.

The news was first reported by KHON2, a local news outlet.

Hawaii requires that anyone traveling to the state self-quarantine for 10 days after arriving. However, they can bypass the quarantine if they are fully vaccinated. A vaccination card must be uploaded to the Safe Travels website and the traveler needs to have a hard copy of one when they arrive in the state, according to the state’s COVID website.

When officials reviewed Mrozak’s vaccination card, it was discovered that the card misspelled “Moderna” as “Maderna.” They also could not verify that she was staying at the hotel she listed on her Safe Travels form, KHON reported.

On Wednesday, “Maderna” was trending online, with many people cracking jokes about the misspelled vaccine name on the fake card.

“See what that Funky, cold Maderna makes you do,” one person tweeted.

“Maderna is literally what my Grandma Dorothy called Madonna in the 80s,” another person wrote.

“Well… she probably chose Maderna because she knew she couldn’t spell Fizur,” one user joked.

But they were far from the only people online who decided to make a joke about the “Maderna” vaccine.

People online also noticed that the fake vaccine card listed “NRA” as the person who administered it.