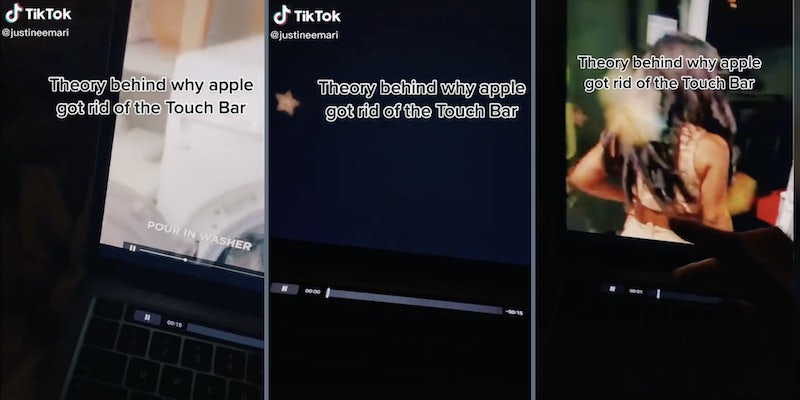 ‘The only thing I use my touchbar for’: TikToker shows how she uses MacBook Touch Bar to skip video ads

The TikToker explained an unexpected perk of having the now-defunct feature.

TikTok has been shocked by an alleged MacBook hack hiding in plain sight.

In the video, @justineeemari narrates, “This is why Apple got rid of the Touch Bar, because you can literally skip through every ad. Period.” She then uses own Touch Bar to skip through multiple ads.

During Apple’s “Unleashed” event this past October, the company revealed it was removing the Touch Bar feature from its newest MacBook Pro offerings. Speculation for its death has ranged from user’s distaste for the Touch Bar to Apple’s lack of updates for the feature.

Despite the general disdain for the Touch Bar, people have praised its ad skipping abilities for years. According to Insider, it only works on the Safari browser.

TikTok users, however, were speechless over the Touch Bar skip.

@studiousgluteus commented, “I have a Touch Bar and literally didn’t know that.”

@emmanuel___03 said, “i remember when i had a online class and i had to watch videos that couldn’t be skipped, it would come in clutch.”

@itsbrunhi added, “Mine still worked, especially for those mandatory school vids that u cant skip, love my touch bar.”

@jaida_brynn commented, “the only thing I use my touchbar for.”

@fdfjugggg said, “Everyone says they don’t use or like the touch bar but i don’t get it. I got the Pro Macs primarily for the touch bar.”

The Daily Dot reached out to @juineeemari via TikTok comment. Apple did not immediately return a request for comment.