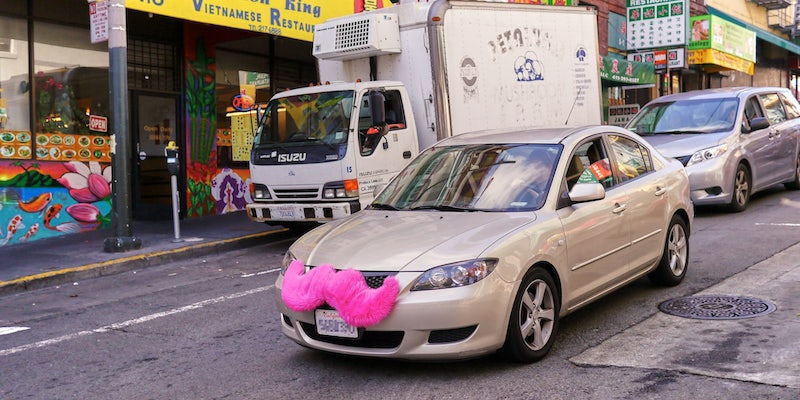 'We know this directly impacts many of our community members.'

In a statement, the San Francisco company on Sunday said it stood against the travel ban, which caused customs agents to detain hundreds of legal U.S. residents and foreign travelers at airports. Federal judges in four states have issued injunctions against the executive order, kicking off a legal battle that may drag on for years. Hundreds of lawyers across the country flocked to major airports where acts of civil disobedience were ongoing in an effort to provide legal assistance to those detained.

The Trump administration on Sunday pulled back on some requirements, ordering a halt to previously enforced bans on green card holders. Trump has banned Syrian refugees from entering the country indefinitely, while a ban on refugees from other countries will continue for up to 120 days. Visitors are banned from seven Muslim-majority nations, including Iran, Iraq, Libya, Somalia, Sudan, Syria, and Yemen.

Controversy ensued over the weekend when Uber—Lyft’s top competitor—turned off surge pricing at JFK International Airport in Queens at the same time New York taxi drivers decided to strike and discontinue rides to the airport in solidarity with those being detained. CEO Travis Kalanick was also heavily criticized online for his relationship with the Trump administration.

“We’re sorry for any confusion about our earlier tweet — it was not meant to break up any strike,” an Uber spokesperson said in a statement. “We wanted people to know they could use Uber to get to and from JFK at normal prices, especially last night.”

Lyft co-founders John Zimmer and Logan Green called out Trump for targeting people based on their faith and announced that Lyft would give $1,000,000 over the next four years to the ACLU, which reportedly raised $24 million this weekend alone—more than six times its average annual budget.

Read the company’s full statement below (emphasis by original authors):

We created Lyft to be a model for the type of community we want our world to be: diverse, inclusive, and safe.

This weekend, Trump closed the country’s borders to refugees, immigrants, and even documented residents from around the world based on their country of origin. Banning people of a particular faith or creed, race or identity, sexuality or ethnicity, from entering the U.S. is antithetical to both Lyft’s and our nation’s core values. We stand firmly against these actions, and will not be silent on issues that threaten the values of our community. We know this directly impacts many of our community members, their families, and friends.

We stand with you, and are donating $1,000,000 over the next four years to the ACLU to defend our constitution. We ask that you continue to be there for each other – and together, continue proving the power of community.