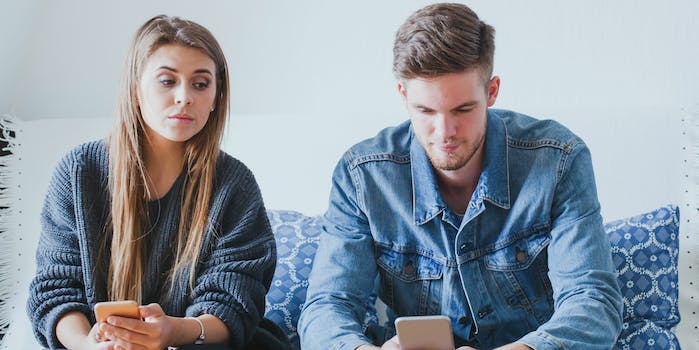 Consider this an education and not an endorsement.

There’s absolutely no reason to justify spying on your significant other. Relationships are built on “trust” and “mutual respect” and “honesty” and all those other words you’d find on the back of a 1980s after-school special VHS, and it’s important to respect each other’s personal space and privacy.

But some couples might find comfort in being able to share their location with a partner: Maybe one of you is a cyclist, and they want their partner to be able to track their rides for safety. Maybe you want your spouse to be able to quickly check in and see that you’re still out to dinner with your college friends instead of interrupting the evening with a call or text.

Certainly, if someone doesn’t care about the “trust” or “mutual respect” or “honesty” or “having respect for another person’s space” or “being a decent person instead of a stain on the boxer briefs of humanity,” they might purchase a spy app for nefarious, one-sided tracking. But you shouldn’t.

In addition to being a shitty thing to do to another person, spyware is also illegal. In 2014, the FBI arrested the creator of StealthGenie, one of many apps that then-Assistant U.S. Attorney General Leslie R. Caldwell described as being “designed for use by stalkers and domestic abusers who want to know every detail of a victim’s personal life—all without the victim’s knowledge.”

For the purposes of this article, we’re going to focus on apps that require participation from both partners, ones that can be used for safety and security reasons in healthy relationships. But just in case it bears repeating: If you’re thinking of trying any of these apps without the person’s knowledge, stop, and try a direct conversation with your partner instead. You might be surprised what you find out.

Available on the Google Play store, Couple Tracker is like an equal opportunity check-in. Both partners must agree to allow their digital activity to be monitored, so you guys can check each other’s calls, texts, Facebook activity, and GPS location from afar. 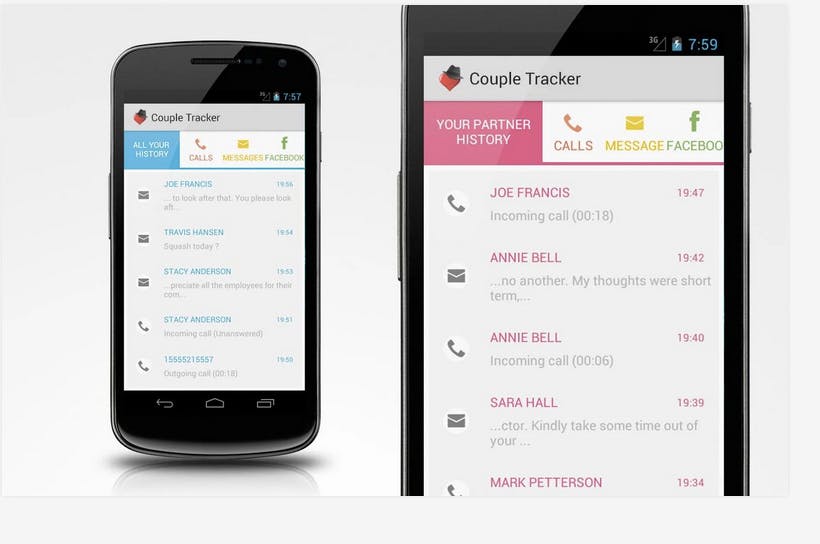 There’s one catch, though: You and your partner only have access to the first 30 characters of each other’s texts, and you can only track your GPS locations within a 30-minute interval. Sure, you can squeeze a lot into a message after those limits, like, “Hey Alex can you grab the McAllister file I think I left it at my desk before… OH GOOD THAT’S MORE THAN 30 CHARACTERS NOW TAKE ME, TAKE ME RAMON YOU ARE COLUMBUS AND I AM AMERICA DISCOVER ME, RAMON, DISCOVER ME!!” But if you’re just looking to share your day-to-day, it’s a non-issue.

There are also rampant complaints in the Google Play store about the app, which range from problems with its refreshing capabilities to the bombardment of ads and in-app purchases.

“But I don’t have kids,” you say. “Why would I use an app called Find My Kids to track down my wife?” Good question, Imaginary Rhetorical Device Person, but Find My Kids comes equipped with a real-time, automatic tracking and sharing function. So if your partner has it on his/her phone, you can find out where they are at any given time, unlike other apps that merely show you their last known location. 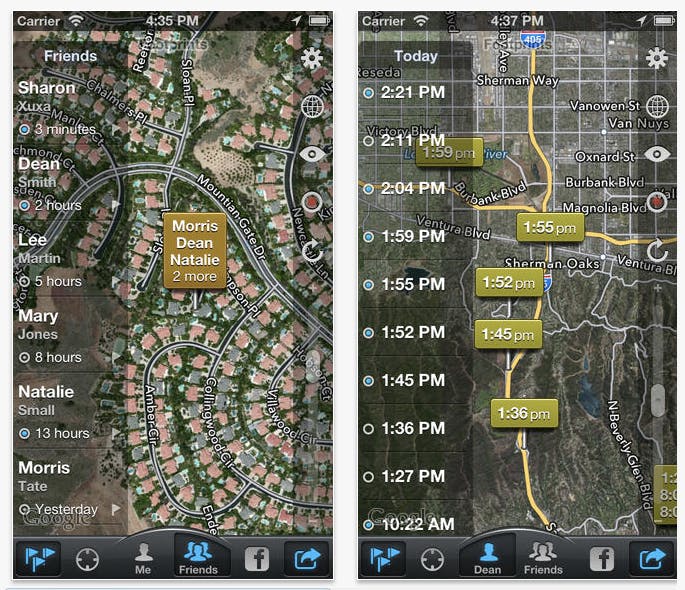 Screengrab via Find My Kids/iTunes

Because the app is targeted at anxious parents who want to make sure their kids are still in school, there’s a geofencing feature that notifies you if your loved one strays outside of a certain area. (That’s a little creepy for adults to sue.) Plus, the app has a handy-dandy speeding notification, which is great for those who care about their partners’ or teenagers’ vehicular safety way more than they care about respecting their privacy.

3) The rest of the internet

You wouldn’t necessarily associate sites like Facebook and Instagram with cyberstalking (jeez, it was hard to even type that clause without snickering), but it turns out their utility for tracking love interests goes beyond clicking through your ex-boyfriend’s vacation photos and snarking about how much weight he’s gained since your breakup.

On mobile, Facebook users’ posts usually include a time stamp as well as a location, so if your partner posts a status update or likes a post while on the go, it’s a pretty safe bet you can gauge his or her location. Same goes for Instagram: The “upload location” feature tells you exactly where a photo was taken regardless of when/where it’s actually uploaded, so if your partner forgets to let you know their flight landed safely, you’ll know as soon as their friend posts a picture from happy hour.

Designed to consensually report the whereabouts of your friends and family, a GPS-based app must be downloaded to you and your partner’s phones to work. There are countless options out there, and given their potentially invasive nature, you should do your homework and read the reviews before giving any of them a try. Here are just a few of many GPS-based tracking apps out there:

Editor’s note: We’ve removed several surveillance apps from this list, due to privacy and safety concerns, and added more background information. We’ve updated the headline to reflect these changes. Apps that shares your phone’s texts and other intimate personal data are going to be inherently invasive, and users should take extreme caution before downloading them, even when they have their partner’s permission.