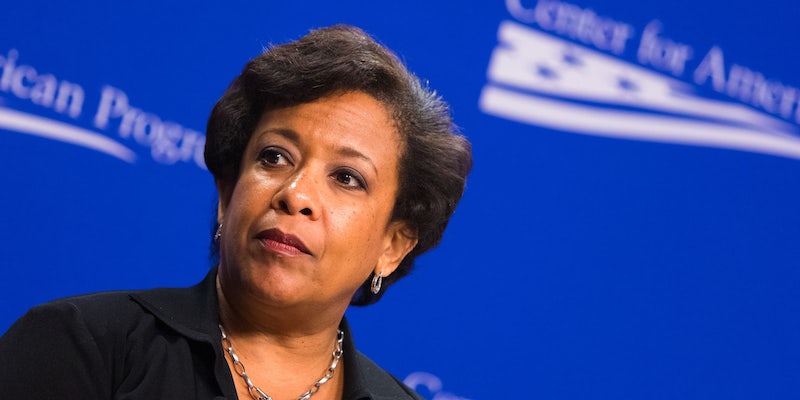 Photo via U.S. Department of Labor

The attorney general said the FBI is acting independently and following the law.

Attorney General Loretta Lynch said Friday that she intends to accept the recommendations of Justice Department prosecutors and the FBI director over whether to bring charges over Hillary Clinton’s use of private email during her tenure as secretary of state.

“As I’ve always indicated, the matter is being handled by career agents and investigators with the Department of Justice,” Lynch said at an event Friday morning in Aspen, Colorado. “They’ve had it since the beginning. It pre-dates my tenure as attorney general.”

The remarks come after news broke Wednesday that Lynch met privately with former President Bill Clinton, aboard Lynch’s plane at Phoenix’s Sky Harbor International Airport. According to Lynch, the conversation was entirely social. “He said hello and we basically said hello, and congratulated him on his grandchildren, as people do,” she said. “That led to a conversation about those grandchildren.”

Republicans and Democrats alike have acknowledged that, regardless of the conversation’s content, the private meeting has at the very least fostered the appearance of impropriety. On Friday, during an impromptu interview with Washington Post correspondent Jonathan Capehart, Lynch acknowledged that it was fair for the public to react with suspicion.

“I certainly wouldn’t do it again,” she said.

“The fact that the meeting I had is now casting a shadow over how people are going to view that work is something that I take seriously, and deeply, and painfully.”

The FBI is investigating whether Mrs. Clinton or her aides violated the law by setting up a homebrew email server for private use during her tenure as secretary of state. Investigators have unearthed dozens of emails referencing classified information. Nearly two dozen of the emails contained information on “top secret” programs and sources, according to the Central Intelligence Agency.

Clinton, the presumptive Democratic nominee, has been repeatedly criticized for not surrendering all of her emails pertaining to official State Department business before leaving office, as is required under the Federal Records Act. Clinton acknowledged the she made a mistake during a presidential debate in March, but she denied breaking any rules. “I made a mistake,” she said, adding: “It was not prohibited. It was not in any way disallowed.”

“Secretary Clinton should have preserved any federal records she created and received on her personal account by printing and filing those records with the related files in the Office of the Secretary,” the State Department’s Inspector General said in the report.

Bill Clinton's meeting was a total secret. Nobody was to know about it but he was caught by a local reporter.

Take a look at what happened w/ Bill Clinton. The system is totally rigged. Does anybody really believe that meeting was just a coincidence?

The case is being managed by career supervisors at the Department of Justice and the Federal Bureau of Investigation, Lynch said on Friday. “They’re acting independently. They follow the law. They follow the facts,” said Lynch, who has not recused herself from the case, and is not obligated to accept the investigators’ findings.

White House spokesman Josh Earnest said Friday that President Barack Obama, who appointed Lynch attorney general, and the White House were “not at all involved” in the email investigation.

“The fact that the meeting I had is now casting a shadow over how people are going to view that work,” Lynch added, “is something that I take seriously, and deeply, and painfully.”