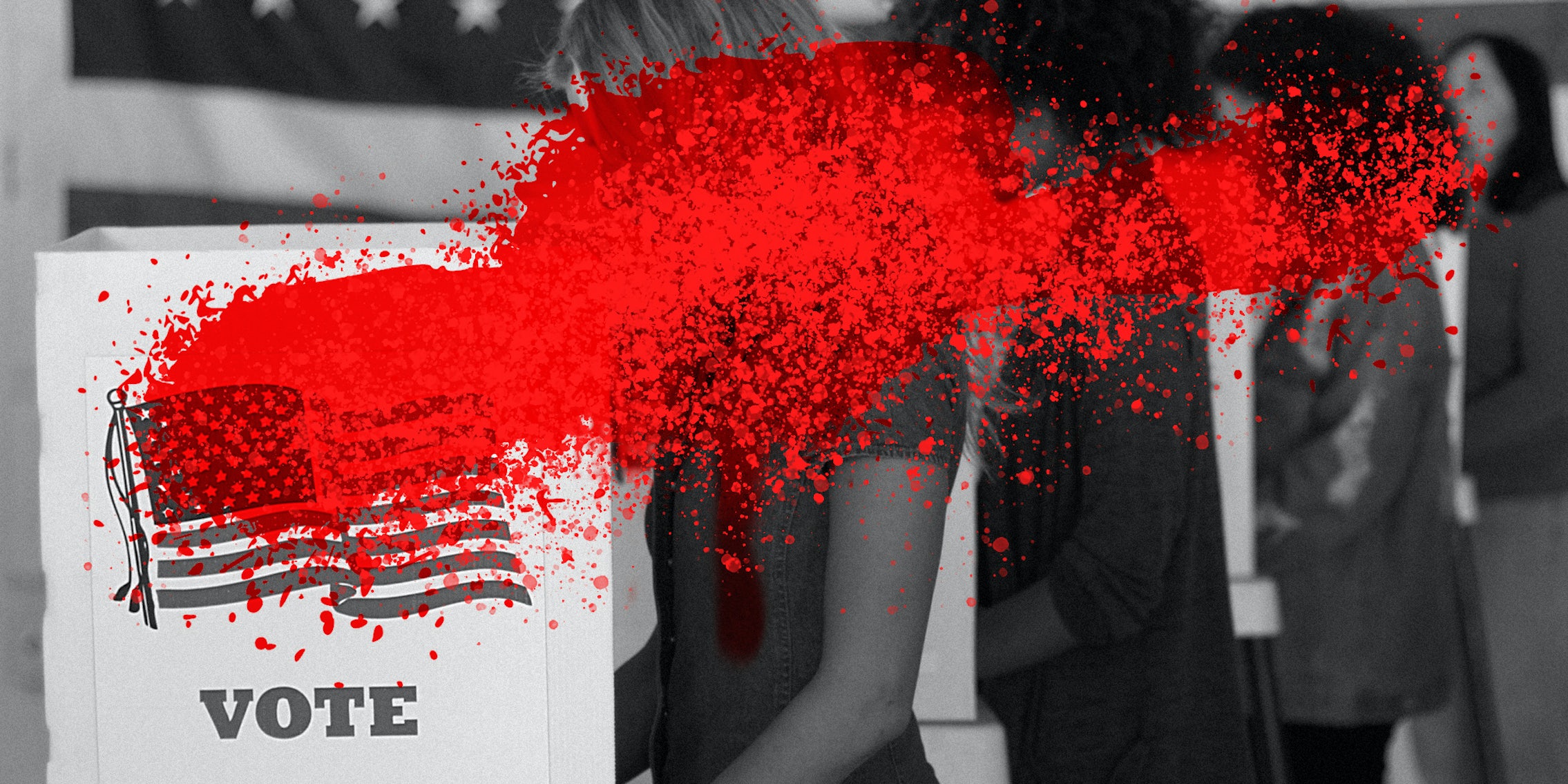 Election officials are warning about its efforts.

Election denialists are in a frenzy over this week’s midterms. Armed groups are monitoring ballot boxes, conspiracy theorists are spreading rumors about efforts to alter the outcomes of various races, and politicians are pumping up the outrage by repeating lies about rigged votes and stolen seats.

The movement claims it is for honesty and integrity, but behind it is the firm belief that no election of a liberal is or ever will be legitimate.

And though the efforts are myriad and sprawling, there are nodes coordinating the movements, issuing directives to harass poll workers, disenfranchise Democrats, and seize Congress by any means necessary.

Take the 3,000-plus members of Look Ahead America’s Discord channel, run by an infamous election denier. They are going person by person, through voter rolls in swing states, and trying to set the agenda for already overworked election officials.

Experts say that their methods are unreliable and that the data they’re using to challenge voter registrations—one of the group’s main activities—is both dated and an ineffective means of determining whether voter registrations are valid. But criticisms and failures don’t dissuade Look Ahead America and its Discord subscribers. To them, election officials who refuse to purge voters at their behest are corrupt and incompetent.

It’s already had success. In recent months, it contacted clerks across the state of Wisconsin, where the 2020 results were hotly debated, and convinced clerks to revoke people’s voter registration based on details as small as inaccurate apartment numbers.

Look Ahead America is a nonprofit created by Matt Braynard, who briefly worked for former President Donald Trump’s 2016 campaign. The group says its mission is to “register, educate, and enfranchise” the “millions of rural and blue-collar patriotic Americans who are disaffected and disenfranchised from the nation’s corridors of power.”

It trains people to lobby for what it calls “America first” reforms and to get out the vote. But its main purpose is uncovering voter fraud, including by teaching people to find it before it even happens.

“The problem with the 2020 election was that so much of this effort was directed at trying to correct voter lists after Election Day,” Look Ahead America’s website states. “We believe that if we apply this rigorous hygiene before the election, we will help prevent illegal ballots from being cast and, just as important, restore confidence in the elections among those who may have doubts.”

Braynard wasn’t a household name like many of his cohorts who pushed fantasies about widespread fraud in the 2020 election. But promoting it has significantly elevated his profile.

He testified in Georgia in 2020 about so-called fraud and raised hundreds of thousands of dollars to try and prove dead people voted in that election. He’s recently been on Steve Bannon’s show and hosted events at the Conservative Political Action Conference (CPAC). Braynard’s also been featured on MSNBC and written about in the Washington Post. He’s currently serving as the senior policy advisor for a Republican congressional candidate who also claims the 2020 election was stolen.

While Look Ahead America insists its goal is protecting election integrity, many are worried it’s the exact opposite.

“This is the big dress rehearsal for 2024,” said Tiffany Flowers, campaign director of the Frontline, a voter advocacy group. “This is the dry run.”

As this article was going to press, Discord kicked Look Ahead America off the platform for “engaging in activity that could disrupt or undermine the integrity of an election.” Look Ahead America subsequently claimed that Discord’s allegations against it are false, adding, “Legal action incoming.” Look Ahead America didn’t respond to multiple emailed inquiries from the Daily Dot.

Look Ahead America promotes its work on social media and its website, but Discord is where its community thrives. The server offers something for everyone, with channels dedicated to topics ranging from entertainment to politics.

And it’s attracted thousands of people to Discord who are inclined to challenge the outcome of the midterms. More than 150 joined just last month.

Allegations of election fraud run throughout the Discord. People often make claims about supposed fraud in 2020—and fret about the future.

Flowers is alarmed by the prospect of a group focused on election denial creating a cloistered online space that could forge its own reality for members. Flowers believes that if Look Ahead America has success overturning the results in one race or jurisdiction, others could follow.

“If something goes terribly wrong in one state and triggers a copycat reaction, then it’s all of our problem,” Flowers said, adding, “What happens in Connecticut matters in Colorado.”

Look Ahead America is working towards precisely this goal. The Discord group is essentially its own private voter fraud investigation network.

It recently released a report claiming that 80% of the 55,000 Arizonans who changed their address are ineligible to vote yet remain on the voter roll. Upon closer inspection, its conclusions fall apart. It analyzed a sample of just 49 voters using a variety of means to determine they’d permanently moved: social media, blogs, and other records. Election officials told the Daily Dot that these are insufficient means of proving someone permanently moved and is ineligible to vote. People, such as college students or those in certain professions, often temporarily relocate or spend part of the year elsewhere and are still eligible to vote in their home jurisdictions.

Braynard’s group says its methods are rigorous and reliable. In reality, it’s basically just cross-referencing the National Change of Address list with information from open-source search tools, like social media profiles and blogs, to come to its own conclusions about whether someone is eligible to vote.

The conservative Hoover Institution recently published an analysis by a trio of political scientists that found that Braynard’s methods—comparing voters to the postal service database—couldn’t distinguish authentic votes from fraudulent ones.

Regardless, the group has expended significant effort utilizing these methods to preemptively challenge voter registrations in Wisconsin. This year it contacted elections officials across the state to claim people were fraudulently registered in their jurisdictions.

In some areas, it challenged a single voter’s registration; in others a handful or more.

Look Ahead America was successful in some cases. Emails released in the report it published ln late October show that some voters were unregistered at its behest. Several clerks said they’d forwarded the information it provided to the local prosecutor’s office. At least one clerk copied Look Ahead America in its communications with a voter.

“Can you please stop in our office ASAP with proof of residence, so that we can update your voter registration address, if you are unable to take care of this via the link provided below?” the clerk wrote to the voter, according to screenshots of emails from Look Ahead America’s report.

The issue was that the voter’s address didn’t include their apartment number.

Look Ahead America feels it is an official part of the process. Its report brags, “Some of the clerks were quite cooperative and removed ineligible voters and, in some cases, even referred the voters for criminal investigations.”

In June, it contacted a clerk to follow up about cases that the clerk told them they’d forwarded to the local district attorney “as it has been one month.” The clerk responded that the DA had contacted them for additional information but said they didn’t know the status of the investigation.

It complained that other clerks ignored them or denied their claims.

One city clerk told the Daily Dot that she was “surprised” that “they were taking this role.” She opined that whatever database they’re working with appears to be “quite dated” and said that her office found that none of the voters they challenged were fraudulently registered.

Kim Wayte, deputy clerk of Allouez, Wisconsin, echoed the same. Wayte told the Daily Dot that they looked into Look Ahead America’s claims but “didn’t find any discrepancies with our voter rolls.”

Look Ahead America isn’t just targeting voters, it’s going after elections officials. In its report about its efforts in Wisconsin, it said it’s provided volunteers with “the proper primary source citations and evidence to get the rolls cleaned up, hold people accountable for breaking laws, remove incompetent and corrupt clerks from their roles, and provide morale for Wisconsin citizens.”

It was incensed that the Wisconsin Elections Commission (WEC) denied nine of its complaints.

“It is unreasonable for the WEC to dismiss without explanation cases of what appear to be double voters and people who registered in new states before voting in Wisconsin, which is illegal. Fortunately, there are county District Attorneys, Secretaries of States in other states, clerks, and fraud units at the DMV that are investigating these as well,” Look Ahead America announced on Discord on Oct. 26.

Last month, the WEC posted guidance for clerks dealing with “emails from third parties” challenging voters’ registration and records. One clerk told the Daily Dot this was inspired by Look Ahead America’s activities. It also sent this guidance to elections officials around the state.

The guidance notes a third party challenged one voter based on them using a post office as their address. It was a disabled veteran residing in a Veteran’s Administration hospital that has its own post office.

Look Ahead America’s efforts to clean up voter rolls are the beginning. Even though votes haven’t been counted, Braynard plans to challenge the outcomes in nine swing states. But you won’t see him raise objections if Sen. Ron Johnson (R-Wisc.) ekes out a win in Wisconsin, even if the group is insistent voter rolls are inaccurate in the days leading up to the vote.

No, what attracted 3,000 people to join the Discord is ensuring Republican wins, the accuracy of the vote be damned.

Flowers of the voter advocacy group the Frontline said groups like Look Ahead America “are only interested in power” and its work is designed to cling to that power.

“The fact that more people aren’t terrified lets me know that fascism has a chance.”