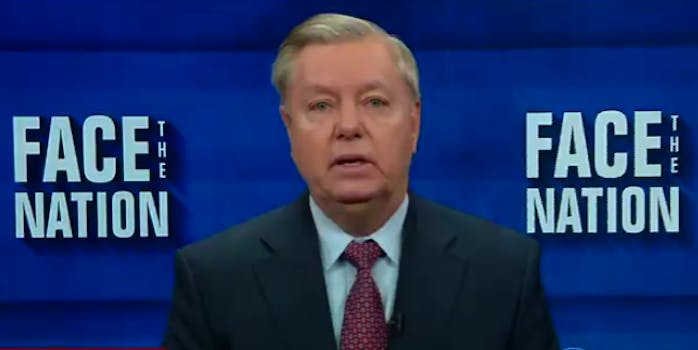 Graham is agitating for increased hostilities with Iran.

South Carolina Sen. Lindsey Graham has called on President Donald Trump to take more decisive action regarding recent anti-government protests in Iran, saying that it’s not enough for the commander-in-chief to simply tweet about the situation. In a conversation with Major Garrett on CBS News’ Face The Nation on Sunday morning, Graham remarked that the people of Iran are “not our enemy,” while calling the country’s supreme leader, Ayatollah Khamenei, the “enemy of the world.”

“It’s not enough to watch,” Graham said. “President Trump is tweeting very sympathetically to the Iranian people. But you just can’t tweet here, you have to lay out a plan. And if I were President Trump, I would lay out a plan as to how I was going to engage with the regime.”

.@LindseyGrahamSC tells FTN what @realDonaldTrump should do regarding #Iran: You just can’t tweet here, you have to lay out a plan. pic.twitter.com/dWNL0hQY8p

Graham didn’t get too specific about what his plan would be, beyond threatening a U.S. withdrawal from the Iran nuclear deal. When Garrett asked him whether he’d communicated these sentiments to the president, Graham replied “I just did,” clearly suggesting that Trump would see his remarks on TV.

By all accounts, Trump has a voracious TV habit, spending hours each day watching Fox News and possessing what’s widely understood to be an incredibly hostile attitude toward CNN. The extent to which he checks in on CBS on Sunday mornings is not entirely clear, so there’s no telling whether Graham’s message via interview actually got through.

This week, protests have surged throughout Iran, with countless citizens of the Islamic republic speaking out against the government. The Iranian government has responded by stifling social media networks and has threatened further crackdowns against demonstrators. It’s the biggest social uprising within Iran since the so-called “Green Movement” demonstrations of 2009, and many neoconservative American politicians like Graham―a longtime proponent of war with Iran―have pounced on the opportunity to advocate for increased hostilities.