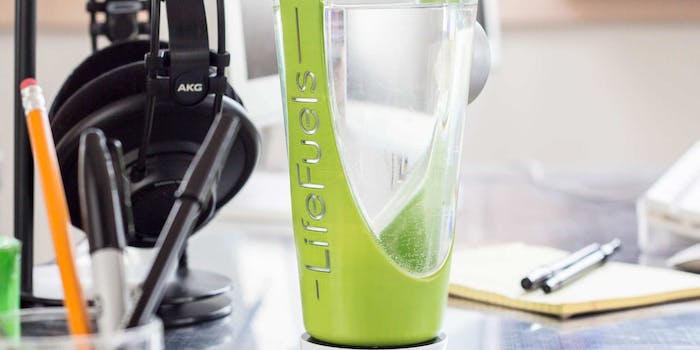 Fuel up for life.

For the tech savvy fitness freaks who don’t want to goo all the way down the rabbit hole that leads to Soylent, an alternate has arrived at CES. LifeFuels is here with a nutrition bottle to smarten up your fluid intake.

Occupying a space somewhere between the shaker bottle and a portable Keurig machine, LifeFuels’ 16 ounce container is a “smart” water bottle that tracks your daily nutrition and provides you with nutrients at the push of a button. 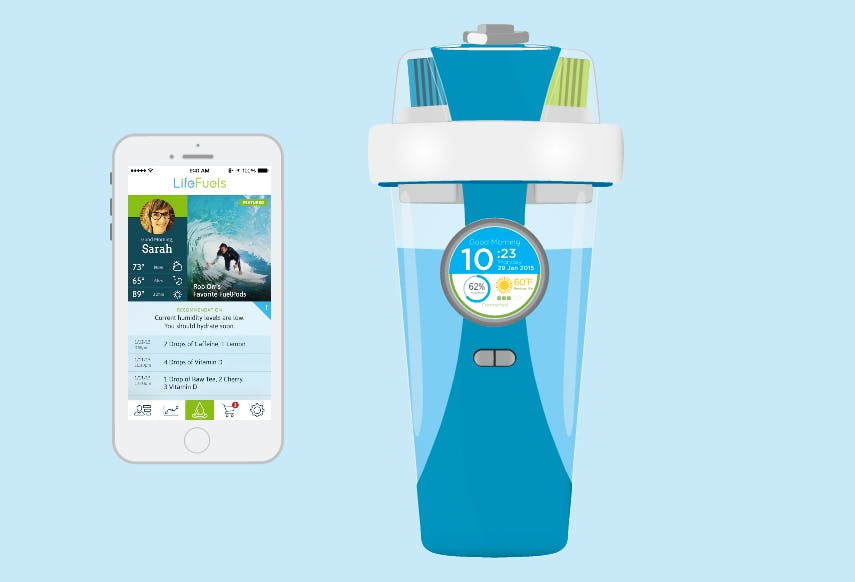 The 2016 CES Innovation Award honoree looks like a standard fitness bottle at the outset, but the top consists of a dispenser system that holds five supplement pods. The reusable holders can be filled with anything from vitamins (like Jamba Juice Boosts), beverage concentrates (think Crystal Lite packets), and other nutritional additives that fit specific needs like pre- or post-workout drinks.

The dispensers can be activated from the bottle itself or from an accompanying smartphone app. The “connected” everything approach to making gadgets is groan inducing at this point, and the idea that you’d want to dispense vitamins into your water is no exception, but least there’s a clear function beyond that for LifeFuels.

And the app provides a community built around the bottle. By coordinating the tracking information generated by drinking from the LifeFuels bottle with data gathered other fitness tracking apps, users can get a fuller picture of their overall nutrition. A spokesperson for the company explained that users could see what type of supplements others with similar body types or workout regimens use and the results they get from it.

The primary purpose of the device isn’t to show off where the company can stash sensors, but to improve the health of users. “It’s a tech product, but if people don’t benefit from it then they won’t want to use it,” a representative for LifeFuels told the Daily Dot. One of the downsides of adding the high-tech aspect to a generally low-tech product: unneeded complications. Instead of just picking up the cup and going, it has to remain charged to maintain its value. LifeFuels has maintained the cup motif, though, utilizing a wireless charger that looks like a coaster.

Similar to Keurig, LifeFuels is partnering with companies to package their products into the FuelPods to be delivered into drinks. The company has cultivated 35 providers so far, with more on the way. A representative from the company said they’re picky about who they choose to pair up with because of the difficulty in ensuring the quality of vitamins and nutritional products.

While the FDA regulates vitamins and other dietary supplements, it is done under a different set of guidelines than foods and medication; supplements can go on store shelves without FDA approval, simply at the assurance of the company that their product is safe. Action can be taken against a product shown to be unsafe or misleading in what it’s selling, but it isn’t prevented from going on the shelves in the first place. This makes LifeFuels’ job in quality control more of a challenge.

LifeFuels diverts from Keurig’s approach to packaging in one important way: the FuelPods are recyclable. Each pod can hold up to 25 servings, meaning you won’t have to load the thing up with new pods every single day. It’s a healthier approach for the earth, too, compared to the immense amount of waste created by Keurig pods—millions upon millions of which continue to occupy space in landfills across the world.

Currently available for pre-order, the LifeFuels bottle is set to be available in 2016, just in time for a convenient tie-in with athletes competing in the 2016 Summer Olympics. Seven-time Olympic medalist  Kirsty Coventry has already placed her seal of approval on the product as she prepares as part of the Zimbabwean swim team for the games in Rio de Janeiro.

The device will run $199 for a starter pack that includes the bottle and 130 pods.