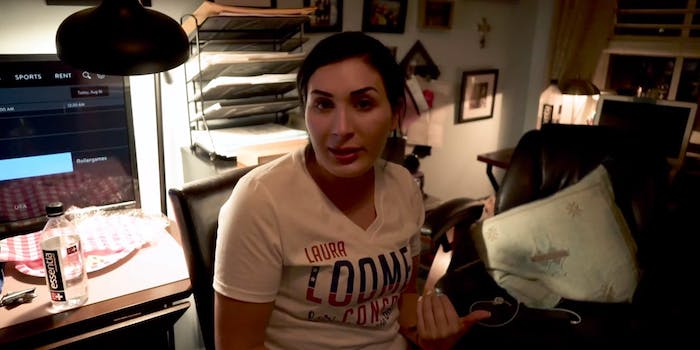 Loomer, 27, is perhaps best-known for bizarre stunts, such as jumping the fence to Rep. Nancy Pelosi’s (D-Calif.) private residence to protest immigration and chaining herself to Twitter’s headquarters to protest being suspended by the platform. She has also been suspended by GoFundMe, Facebook, Uber, and Lyft, several of which were for making Islamophobic statements.

Loomer made her internet suspensions a feature of her campaign, which focused on free speech, breaking up large tech companies, the Second Amendment, and “making America safe again.”

The issues page of her campaign website consisted of a YouTube video on each of these four subjects.

Although many ridiculed Loomer’s campaign ahead of today’s primary, Loomer raised more than $1 million—including from big-name Republican donors. As Florida Politics reported, however, much of her fundraising haul was spent back on more fundraising.

Although the results have not been finalized, Loomer was leading her opponents by several thousand votes when the race was called. Loomer’s victory was first called by Decision Desk.

On YouTube on Sunday, Loomer claimed that a local television station had already called the election for one of her opponents. “This is voter suppression,” she said.

The station told a blogger that the posted “results” were an internal test of its election reporting system. As of this morning, the page showed no election results.