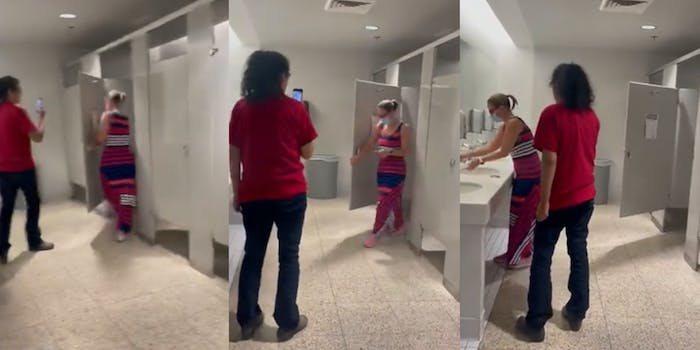 ‘We knocked on doors for you’: Video shows activists confronting Krysten Sinema in a bathroom

'And just how we got you elected, we can get you out of office if don't support what you promised us.'

A viral video shows a group of activists following Sen. Krysten Sinema (D-Ariz.) into a bathroom at Arizona State University where they express frustration over the senator being an obstacle to passing a massive reconciliation bill that is supported by progressives.

Sinema, along with Sen. Joe Manchin (D-W.V.), has drawn ire from many progressives for her lack of support for the reconciliation bill and its $3.5 trillion price tag. That frustration was caught on video over the weekend when activists from Living United for Change in Arizona (LUCHA) confronted the Arizona senator. Sinema is a lecturer at the school.

The video shows activists saying: “Senator, we want to talk to you real quick.” Sinema answers: “Actually I am heading out” and walks down a hallway.

The activists, still filming, follow Sinema as she walks into a bathroom.

“Right now is a real moment that our people in order for us be able to talk about what is really happening. We need a ‘build back better plan’ right now,” one activist tells Sinema.

“We need solutions, and the Build Back Better plan has the solutions we need,” another activist says as Sinema walks into a bathroom stall.

“We knocked on doors for you to get you elected,” a third activist says. “And just how we got you elected, we can get you out of office if don’t support what you promised us.”

A woman who says her name is Blanca adds that she was brought to the United States when she was three years old and that her grandparents were deported in 2010.

“My grandfather passed away two weeks ago, and I was not able to go to Mexico and visit him because there is no pathway to citizenship. If we have the opportunity to pass it right now, then we need to do it because there’s millions of undocumented people just like me who share the same story.

After a few moments, Sinema walks out of the bathroom stall and washes her hands while the activists continue to talk to her.

In a follow up video posted by LUCHA, the activists asks Sinema if she would support the reconciliation bill. As Sinema walks past them out of the bathroom, they begin chanting “build back better, pass the bill.”

“We wouldn’t have to resort to confronting @senatorsinema around Phx if she took meetings with the communities that elected her. She’s been completely inaccessible. We’re sick of the political games, stop playing with our lives,” LUCHA Arizona tweeted.