What happens when the extremely centrist meets with the far-left.

Twitter-banned Ed Krassenstein stopped by the Chapo Trap House subreddit to give the world a bit of insight into what the life of the ousted internet warriors look like since he and his brother Brian were permanently suspended from the platform.

Krassenstein began by criticizing Twitter for booting him and Brian without providing any clear reason. He’s not wrong, the company wrote vaguely: “the Twitter Rules to apply to everyone. Operating multiple fake accounts and purchasing account interactions are strictly prohibited. Engaging in these behaviors will result in permanent suspension from the service.”

He went on to write that Twitter has “every right to ban us” and say that he’s not angry that he and his brother were suspended—echoing statements he made to theDaily Dot in a phone conversation two weeks ago.

Krassenstein says that he’s mad at the media for not asking more specific questions from Twitter and for simply running the platform’s statement. He maintains that he and his brother never purchased interactions or ran bot networks.

Krassenstein wrote that: “Twitter wasn’t our life, no matter how much people thought it was.”

He says that they only made about $4,000 from their Twitter presence over the past four years and that they’ve made that cash “through providing legitimate services to the community.” He claimed that it’s ironic that the media is accusing the duo of being “grifters” and took a shot at the press, writing “the media hated us because they didn’t like the fact that we emerged out of nowhere to have a louder voice than they did.”

Ed closed by saying that the brothers are just fine and that they bought a lot of bitcoin eight years ago. 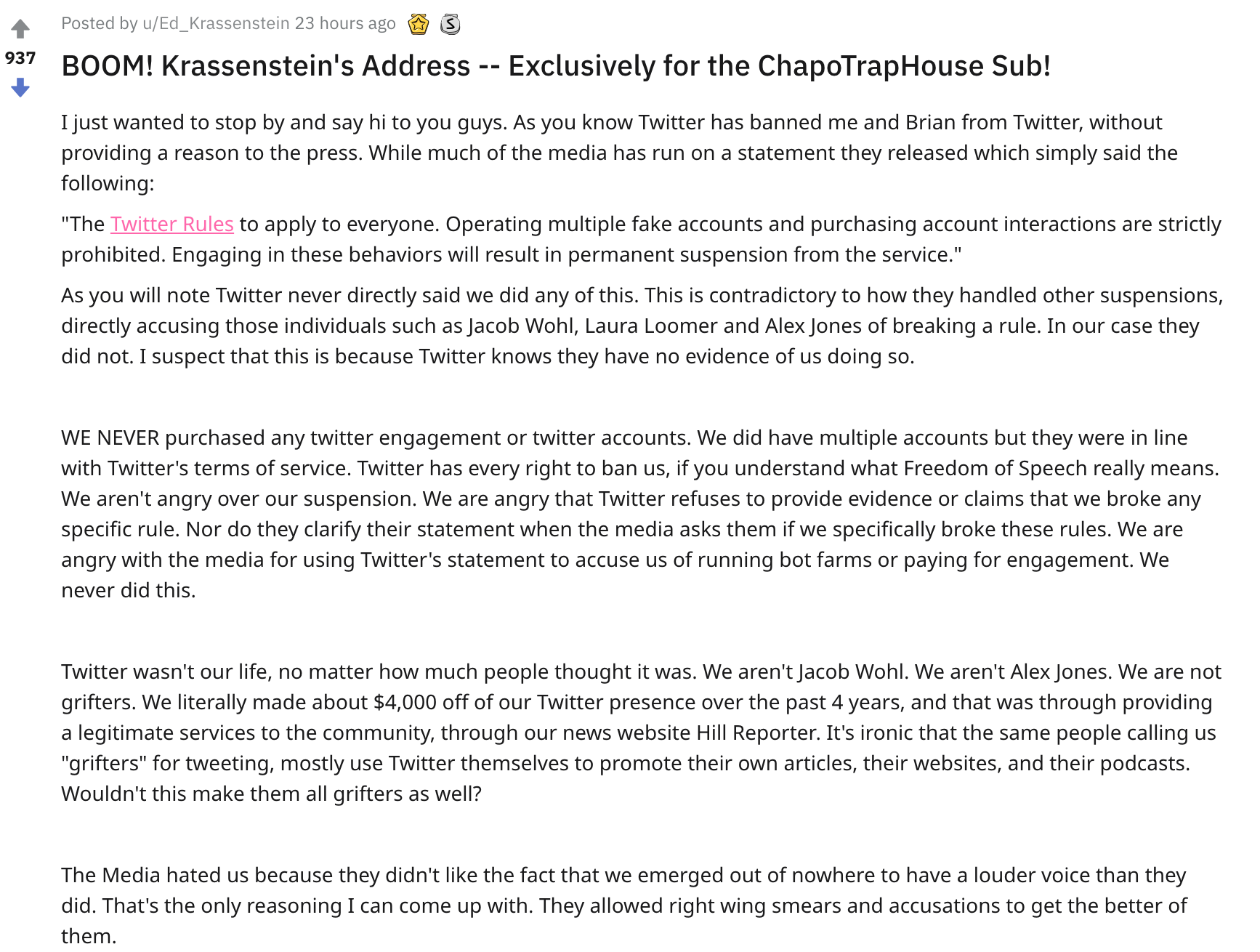 The commenters were good sports about a Krassenbro BOOMing in their subreddit.

One wrote: “It’s great how we went from relentlessly making fun of you guys to this sub being the only place to welcome you.” Another urged, “read Marx bro.”

It’s hard to say what the Chapo boys think of the Krassentakover but they don’t seem to be entirely pleased.

Host Will Menaker tweeted a Google search for “Can I delete a subreddit I’m not a mod of.”

Felix, Matt, and Virgil have all remained silent, so they’re clearly not completely against the BOOM.

In August of 2018, Chapo discussed the Krassenbros and their book. Felix called the pair, “these two yoked brothers who look CGIed” and later guaranteeing to listeners that they would have beat the FBI in a gunfight. Ed Krassenstein told us that he’s heard that episode and called it “hilarious.” He said: “We listen [to Chapo] once in a while.”

Asked by the Daily Dot why he chose the r/ChapoTrapHouse subreddit to explain his situation in, Ed said, “their sarcasm and humor is a relief.  While their views differ from mine quite a bit, at least they debate in a non-hateful way. Wish there was more of that in politics.”

In another text, Ed told us that they were negotiating to bring fellow banned Twitter user, Laura Loomer on their podcast. The Daily Dot recently reported that both Loomer and Jacob Wohl reached out to the Krassensteins after they were banned from Twitter.

Throughout conversations, Krassenstien took issue with him and his brother being branded as “grifters.” He complained “we never ‘grifted’ anyone. We didn’t profit off of these past three years. We did it because we felt we had a voice and wanted to use it.”

He also said that they donated money that they made off Hill Reporter to Planned Parenthood and “donated Christmas gifts to children whose parents were unable to get them anything.”

Asked why they haven’t given to any 2020 candidates (a donor search for “Krassenstein” brings up only one contribution—a $19 donation from Brian to the pro-Democrat group It Starts Today), Ed said that they haven’t made up their mind on who they will support.

It’s a bit difficult to guess what comes next for the Krassensteins and Ed didn’t seem to have any answers.

Unsurprisingly, the pair have apparently bought up bitcoin and are making money off that. He also told us previously that they own a few “investment properties”—whatever that means. They plan to continue to host their podcast, which is carried on Spotify.

We can only hope that the Chapo boys bring the heroes of the #Resistance onto the podcast.