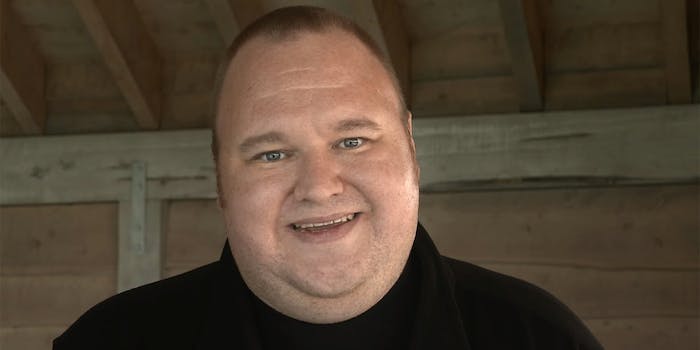 Many consider him a champion of the free internet.

Internet entrepreneur Kim Dotcom has lost his latest appeal in New Zealand court and could be extradited to the U.S. after all. It’s now up to New Zealand Justice Minister Andrew Little to decide if the country should go forward with the extradition process.

Kim Dotcom, born Kim Schmitz, founded the file-sharing site Megaupload in 2005. The U.S. and New Zealand governments shut down Megaupload in 2012 and charged Dotcom and three others with a variety of offenses: conspiracy to commit racketeering, conspiracy to commit copyright infringement, commercial copyright infringement, and money laundering. The Department of Justice has called it “a worldwide criminal organization whose members engaged in criminal copyright infringement and money laundering on a massive scale with estimated harm to copyright holders well in excess of $500,000,000 and reported income in excess of $175,000,000.”

Since 2015, the U.S. has been trying to get Dotcom extradited to go to trial for his alleged offenses. Over the years, Dotcom has faced three different courts in New Zealand, each with “a different legal analysis,” Dotcom’s lawyer said on Twitter. The latest court decision upholds an earlier ruling that found Dotcom and his co-conspirators eligible for extradition.

While the U.S. holds Dotcom accountable for Megaupload and how it was used, Dotcom argues that he can’t be held accountable for those who chose to use his site for illegal activities. He’s also never lived in the U.S. and has never had a company based in the country. Many consider Kim Dotcom a champion of a free and open internet.

“We are disappointed with today’s Judgment by the New Zealand Court of Appeal,” Ira Rothken, Dotcom’s U.S. lawyer, told Ars Technica via email. “We look forward to seeking review with the New Zealand Supreme Court. We think that ultimately Kim Dotcom will prevail.”

Since Megaupload shuttered in 2012, Dotcom opened up an alternative cloud storage site, Mega. Dotcom also released an EDM album in 2014 and has championed a political party called the Internet Party.