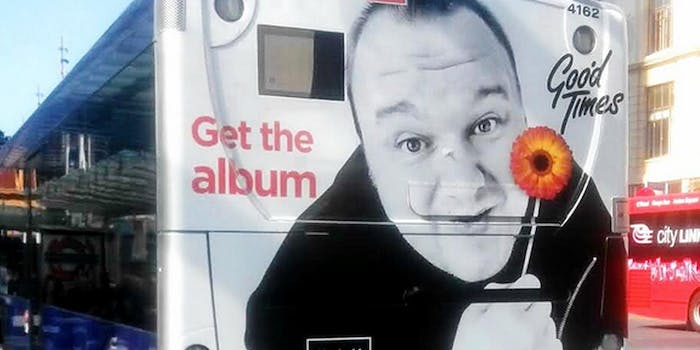 Who here’s ready to let the Good Times roll? Renegade Internet mogul Kim Dotcom sure is. He released an album bearing the exact name Monday: Good Times, a musical project he’s been working on for more than two years.

Evidently, he’s already done himself a good amount of advertising.

I was shopping in the mall when I came across a large poster of @KimDotcom advertising the Good Times Album pic.twitter.com/D0NNopbrxD

The debut collection, a 17-track EDM banger Dotcom produced himself, is available via all your online music hubs: Spotify, iTunes, and Amazon, in addition to Dotcom’s softly launched Baboom, a Spotify-style music-subscription service that can currently only claim ownership of one album. (You guessed it!)

According to a press release—our review’s coming soon—the album features contributions from Sleep Deez, Printz Board, Rellevant, JD Walker, and Tiki Taane, and comes inspired by the trance and dance music Dotcom once listened to while driving really fast on the German Autobahn.

“It has a positive vibe all the way through,” he said in a radio interview. “When I was in the studio working on the album it was just a total relief because I could just switch off all the dark clouds and negativity and go in there and work on something really positive.”

Those dark clouds, of course, pertain to his “living in a golden cage.”

That Good Times arrived on Jan. 20 is no coincidence. It was two years ago on that day that FBI agents raided his New Zealand home as part of the shutdown and seizure of MegaUpload, his iconic file-sharing site, sending him into a legal tailspin that continues in 2014.

One year later, also on Jan. 20, Dotcom responded in earnest with the launch of Mega, a less popular followup to Megaupload. The site, which has seen steady worldwide growth since its launch, has attempted to present itself as a legal counterpart to Megaupload’s storage locker, but has eventually gone the way of online pirates. A third-party piracy engine launched within three days of the site’s launch.

Dotcom said that he’s already begun work on a followup to Good Times: the uniquely titled Hard Times, which he says is not the result of “difficult times” but rather his interest in “go[ing] into a harder direction” with harder beats and fewer vocals.

“I want to play at more festivals,” he said. “I want to make music for the crowds where they go nuts.”