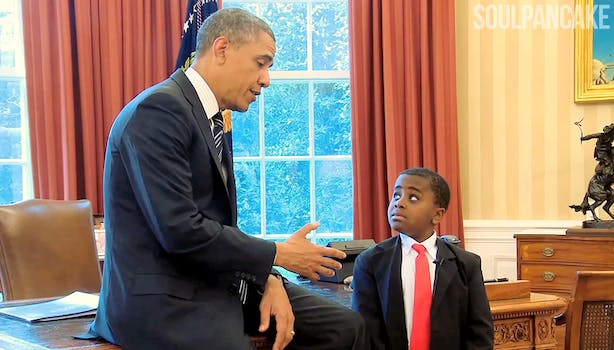 One president is working towards equal rights and stricter gun control. The other president is 8 years old and runs on a platform to be a party. They finally met.

One president is working towards equal rights and stricter gun control. The other president runs on a platform to be a party.

And now they have finally met face-to-face.

They previously teamed up on YouTube to launch the annual White House Easter Egg Roll lottery, but now President Obama gave him a tour of the Oval Office as they shared advice on how to change the world (and even invited him to sit behind the desk to make things feel more official).

Both presidents have a lot in common. They both list Abraham Lincoln as a favorite president and they both know a thing or two about balancing their duties. While they each have to deal with the responsibilities of being president, Obama has a country to run, while Novak has to juggle his duties with being in the third grade.

And each president has plenty to learn from the other.

“You think I’m doing awesome?” Obama asked. “Thank you. That means a lot to me. I think you’re doing awesome.”

Novak wants to change the world, but it won’t be easy. He looks for his own advice from the president on how both kids and grown-ups can achieve it.

“The most important thing we can all do is to treat each other with kindness and respect,” President Obama said.

With an answer that could have easily applied to many members of Congress, Obama explained that if people learn to be nice to each other and treat everyone fairly as kids no matter what they look like or what they believe in, they’ll do the same thing as adults.

“Between the two of us, maybe we can kinda get things going in a good direction,” Obama said.

Even though Obama and Novak are competing over one title, it’s still OK to go for a hug. When asked about the conversation, Novak said they had “small talk,” but his grin spoke volumes.

Kid President is changing the world one video at a time.