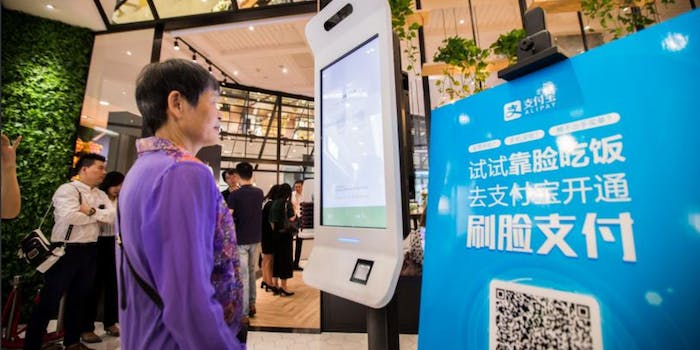 The system is part of a health-focused concept store in China.

KFC is at it again, using technology in strange ways to entice people to eat greasy fried chicken.

This time, a store in the eastern Chinese city of Hangzhou is deploying facial recognition—a technology increasingly used for smartphone authentification—as a new payment method. Dubbed “Just Smile,” the system lets customers pay by scanning their face and entering a phone number at an ordering kiosk. Annoyingly, customers will need to force a smile as grease settles to their stomach and fast food funds get deducted from their bank account.

Joey Wat, president of Yum! China, said the store is for “young, tech savvy consumers,” according to Reuters. It’s also for people willing to give a close-up selfie and phone number to a fast food chicken place. At least KFC is aware people will inevitably try to trick its new machines.

The system is one piece of a concept store filled with odd tech ideas and uncharacteristically healthy food options. It’s practically a Panera, described by Reuters as having seasonal produce, made-to-order salads, and paninis. Also, the chicken is “roasted,” something that’s sure to tick off the Colonel. It even has freshly squeezed juices, gourmet coffees, and best of all: beer.

This awkward smiling machine doesn’t even make the cut for KFC’s strangest tech-filled ideas. Last year, the fast food giant sold sunscreen that smelled like fried chicken and made a kiosk that recommends foods based on how you look. This year, it shot a chicken sandwich to the edge of space and built a terrifying VR training program. Whatever takes people’s minds off its food, I suppose.