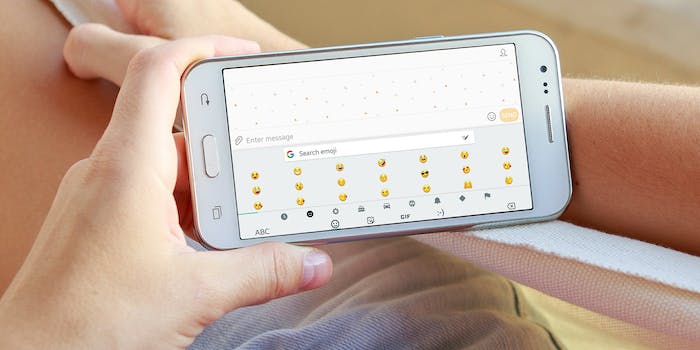 How to get the latest emoji for your Android device

Emoji are this generation’s way of expressing feelings through text when words don’t do justice.

One thing to keep in mind is the translation of emojis across devices. On iPhones, emoji appear differently than they do on Samsung and Google devices. To help streamline your emoji experience and cut the confusion, here are the best emoji keyboards for Android devices.

How to get iOS emojis for Android

Android has its own emoji, but they aren’t quite the mainstream emoji standard—iOS maintains its strict jurisdiction there. As Techonation explained in 2018, you might come across multiple apps that promise solutions to all your emoji-related woes. However, these apps only alter the look of emoji within your Android phone. In order to truly install iOS emoji into your Android phone, you’ll have to root it. Rooting, in Android speak, means gaining root access to the operating system (a process known as “jailbreaking” with an iPhone). There are significant risks associated with rooting, however, and it’s usually recommended for more advanced users and programmers. Here’s how to download iOS emojis for Android without rooting your phone.

Under your phone’s Settings menu, select Security and enable “unknown sources.” This will allow you to download an app from outside the Google Play store.

Emoji Font 3 is an app that has been removed from the Play store but is still available via external links. Go back to Settings and adjust your font settings. You should find font settings under display, gestures, or fonts. Set your phone’s font to Emoji Font 3.

Downloading the Gboard from the Play store allows users to easily switch between keyboards, from regular Android text to the Emoji Font 3.

The best keyboards with emojis for Android

Keyboard-Emoji, Emoticons is a colorful keyboard app that has more than 3,000 emoji, emoticons, stickers, and GIFs to use across different messaging apps. The keyboard only works on Allo, Facebook, Twitter, Instagram, and WhatsApp. One of the best features of the keyboard app is the ability to customize your keyboard with different patterns and colors.

This keyboard app works on both SMS as well as social media and messaging apps. The keyboard has more than 100 fonts, themes, and emoji. Besides emoji and colorful themes, the app lets users communicate in more than 60 different languages.

A straightforward emoji keyboard, this app offers a vast selection of emoji, emoticons, stickers, and GIFs to send to family and friends on Facebook, Allo, Instagram and other social media and messaging apps. The app is also multilingual, featuring more than 30 language options.

Besides more than 3,500 emoji and emoticons, the app also lets users create Facemoji based on their face. The keyboard app works across social media and messaging apps like Facebook and WhatsApp.

The main focus on this keyboard is the ability to type fast, but also in style with more than 10,000 colorful themes. There are more than 1600 emoji, animated smileys, and animated stickers. Users can also make their own GIFs or select a sparkling space keyboard background. If you want a keyboard that’s a little extra, this is it.