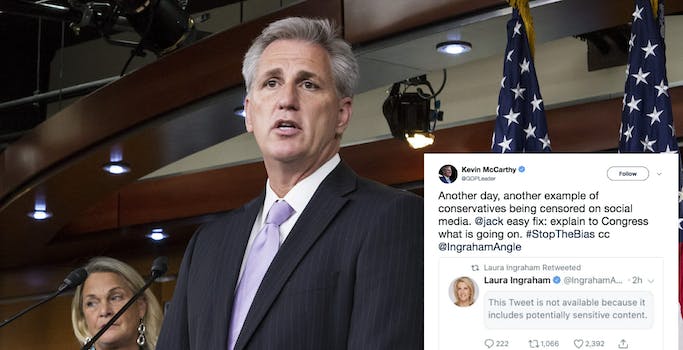 But his early adopter status hasn’t appeared to bequeath him any sort of expertise: The other day McCarthy cried censorship when it really was his own settings that stopped him from seeing a tweet.

It began on Twitter, as everything does these days.

Another day, another example of conservatives being censored on social media. @jack easy fix: explain to Congress what is going on. #StopTheBias cc @IngrahamAngle pic.twitter.com/QjzpmfadXS

McCarthy was complaining that he couldn’t see a tweet from Fox News’ Laura Ingraham. But the warning he received about Ingraham’s tweet containing “potentially sensitive content” is because, in his Twitter settings, he can choose whether he wants to see that content displayed. So McCarthy was preventing himself from seeing it.

He was swiftly corrected by the masses.

My God, this is just embarrassing.

Even Rep. Nancy Pelosi (D-Calif.) made fun of him.

Whether Ingraham’s tweet about migrants to Sweden should be considered sensitive is another whole matter.

Sweden’s Muslim population has been at the center of misreporting by the far-right, which claims there are no-go zones in its cities which police are afraid to enter. And Ingraham’s comments on immigration have been called out lately for echoing white nationalist sentiment.

So it could reasonably be considered sensitive content, as it seems to stoke racial animosity.

But if McCarthy wants to see that in the TL, Twitter isn’t stopping him.