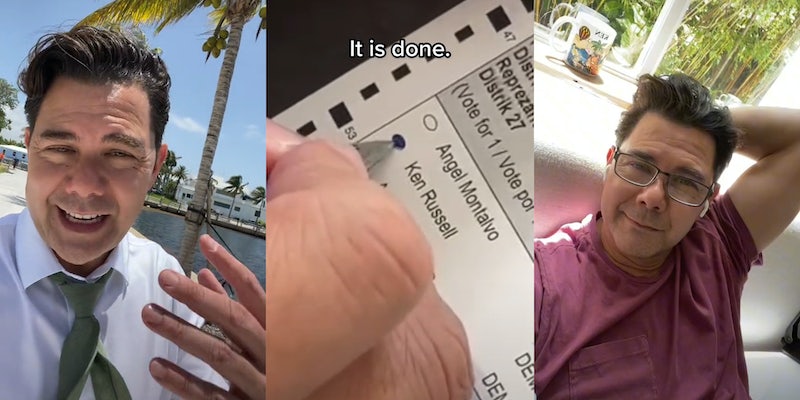 Will virality turn into votes?

One of @kenforflorida’s most prominent TikToks, published in June, starts like many others on the video-sharing app: with a woman crouching on the floor to change into a skimpy outfit over a Megan Thee Stallion song.

The thousands of users who stayed around to watch the end of the video, though, were hit with an unexpected turn of events: instead of a content creator’s outfit change, they witnessed Florida Democrat Ken Russell dropping on the floor to the song’s beat before looking closely into the camera and asking: “Hey, are you registered to vote? There’s a primary on August 23 and the general election is November 8!”

“Best political ad ever,” a user commented. “Bro is a master of influence,” added another. “THIS WAS SMOOTH. Who do you recommend voting for, because rn the world is upside down,” yet another asked. The video got 75,000 likes. But it’s not even close to his most popular.

A number of politicians have taken a crack at TikTok, hoping to reach the youngest generations of potential voters where they spend most of their screen time. Two years ago, people like Sen. Jon Ossoff (D-Ga.) and Sen. Ed Markey (D-Mass.) led the game. But these days, nobody is doing it quite like Russell, who is running as a Democrat for the House of Representatives for Florida’s 27th district in the 2022 midterms.

A former owner of a watersports business, Russell turned to local politics in 2013 after finding out the park his kids played in was contaminated with toxic soil. Two years later, he won the elections to represent his district on the Miami City Commission, a role he has stayed in ever since.

Despite years of work as a serious politician, his TikTok presence has been called “completely unhinged”—a definition the candidate himself reclaimed in one of his many viral videos. If comment sections and like counts are any indication, though, the app’s users are loving it.

In one extremely popular TikTok, which reached 25 million viewers, Russell called out another user, @jfauch09, for repeatedly polluting, littering the ocean with beer cans and bragging about it on the app. He asked his followers to find him so he could speak with him about his environmental destruction, a feat he accomplished.

In another video, Russell pretends he’s being chased away by his neighbors for reminding them their absentee ballots finally arrived in the mail. The replies? “I hope you win.” “I couldn’t vote for you because I’m in Palm Beach county but I voted by mail already!” “Went ahead and requested my absentee ballot  just so I can vote for you!”

It’s not just memes and viral sounds, though: a video where he answers a follower’s question about his stances on policies—listing clean water, LGBTQ+ equality, gun reform, and the protection of reproductive rights as his priorities—got 572,000 likes. Another, tagged #nerdtok, had him explaining his position on a niche water management policy in an accessible way.

What truly seems to be setting him aside, though, is the overall vibe of his videos: whether he’s stitching someone else’s TikTok, hopping on a viral sound, or replying to his followers in the comments, he maintains a dorky, approachable aura. In short, he doesn’t feel like a politician at all. He feels like someone who is just using TikTok.

“I try to entertain and to engage, and then I try to educate—all in the same post. Sometimes it’s just entertaining, in the hope that they’ll stick around or they’ll follow me and then they’ll get informed. My most successful video was just to let people know that there’s a primary: millions of people who didn’t know that before now do, and hopefully, that will increase the number of votes,” Russell told the Daily Dot. “There’s three universities and colleges in the district where I’m running for Congress. And I know they’re watching. I know these 18, 19, 20-year-olds are watching. Will they engage? I hope so!”

Russell dropped out of the Florida Senate race earlier this year and is now working to secure his nomination for Florida’s District Twenty-Seventh District in the Democratic primary, held on Aug. 23. The other candidates in the race are Angel Montalvo and Annette Taddeo, who dropped her bid for Florida governor. All three hope to flip Rep. Maria Elvira Salazar’s (R-Fla.) seat.

An internal poll released by Taddeo’s campaign in June showed a 36-point edge over Russell, but it’s possible his notoriety online will make it more of a fight when Florida voters go to the polls.

For Russell, TikTok was only supposed to be an outlet. “Since I’ve been running for Congress, my campaign team have been handling my Facebook, Twitter, and Instagram—they left me with nothing to do. So I turned to TikTok,” he said. “They were actually very concerned, because they saw me posting things without any rehearsal, without any makeup or script. They tried to stop me at first, but now they’ve embraced it, and they just stay out of the way.”

The difference from other social media platforms, he said, is striking.

“When Twitter came about, it allowed politicians who were snarky or sarcastic or witty to suddenly gained fame by reacting to situations. They would write their one or two sentences and everyone loved it and that grew their following. Facebook came along and it was much more about engagement, but it also allowed you to buy your audience—and that has been the paradigm of political social media for the last few cycles,” he said. “Then here comes TikTok, and nobody knows what to do about it. You can’t buy your audience on it, you can’t have your consultant run it. You have to be yourself. And that is a good thing for some people and a bad thing for the politicians who are only successful because people don’t see who they really are.”

Far from seeing it as a silly dance app—a mistake that many are still making—Russell quickly became aware of the fact that many young and marginalized people turn to TikTok to find a community, to connect and communicate about topics that are deeply political, like reproductive and sexual rights or the environment.

As a left-leaning Democrat, he is well positioned to listen and interact with people who might be voting for the first time in 2022.

“If you are sincere, and you’re in it for the right reason, and you speak and respond to your audience, you will resonate here and it will find an audience that can affect an election,” he said.

Russell says he even managed to discuss a little with people he would otherwise have had little in common with thanks to the app. For instance, after posting a TikTok advertising a project meant to collect guns in the Miami area to send them to Ukraine, he attracted the attention of gun fanatics who showered him with comments and messages accusing him of wanting to repeal the Second Amendment.

“I remained humoristic and optimistic, I engaged instead of ignoring, and a few of them reacted by telling me things like ‘you know, I don’t like your gun policies, but I love to see what you’re doing for clean water.’ They’re starting to engage with my other media. Some of them are coming around, and they might even vote for me,” he said.

Come August, Florida will show if TikTok’s reach can actually swing an election.