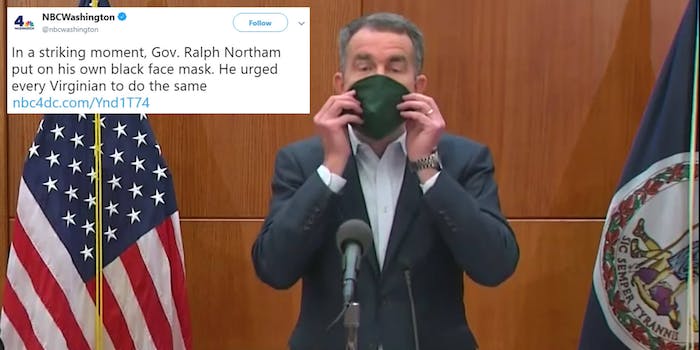 'We made a misjudgment in a tweet about Gov. Northam’s face mask.'

An NBC affiliate out of Washington D.C. deleted an awkward tweet on Monday stating that Virginia Gov. Ralph Northam had worn a “black face mask.”

The incident began as Northam, who stirred controversy last year when a year book photo was discovered showing two men in blackface and another in a Ku Klux Klan outfit, addressed reporters on the coronavirus pandemic.

Following the CDC’s recent recommendation that masks be worn in public, Northam donned a mask of his own in an effort to encourage others to do so as well.

“In a striking moment, Gov. Ralph Northam put on his own black face mask,” NBC Washington said. “He urged every Virginian to do the same.”

Given Northam’s history with the racist caricature, including his own admission of donning blackface for a Michael Jackson tribute party in 1984, Twitter immediately took note of the tweet’s wording.

“Well, to be fair, he is somewhat of an expert on putting on his own black face mask,” Twitter user @SSludgeworth wrote alongside the NBC tweet.

Unsurprisingly, the NBC outlet quickly noticed the wording of its tweet and opted to delete it.

In a statement shortly after, the media company issued a “correction” regarding the tweet.

“Correction: We made a misjudgment in a tweet about Gov. Northam’s face mask,” the tweet said. “We sincerely apologize for the error.”

To make matters worse, the mask worn by Northam may not have even been black. NBC Washington later added in another deleted tweet that it believed the color was actually green.

“Upon closer examination, the governor’s face mask appears to be dark green,” the outlet said.

“Why would you delete this masterpiece?” @greg_price11 asked.

Others accused the outlet of purposely wording the tweet as it did in order to make light of Northam’s history with blackface.

“This wasn’t a misjudgment. It was a sick attempt at a joke,” Twitter user @loisaparker wrote. “I thought you were better than this.”