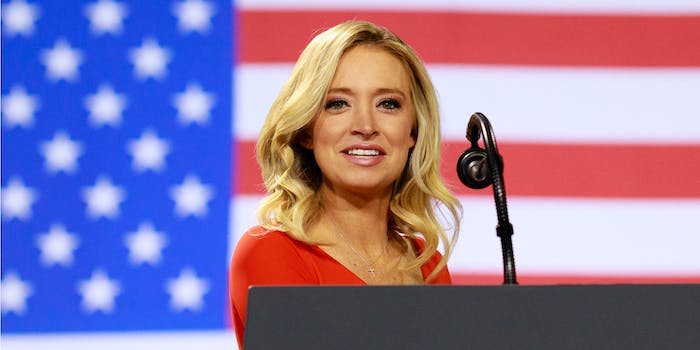 A viral video resurfaced on Twitter this week of Kayleigh McEnany claiming in a Fox News interview a year ago that coronavirus would not reach the U.S.

“We will not see diseases like the coronavirus come here. We will not see terrorism come here, and isn’t that refreshing when contrasting it with the awful presidency of President Obama,” McEnany, the former White House press secretary, says in the video.

The video was originally reposted to Twitter in October 2020 by The Daily Beast writer Matt Wilstein, but was reposted Thursday by CNN news anchor Jake Tapper with the comment: “One year ago today.”

The tweet has received more than 87,500 likes and 22,000 retweets since being posted Thursday.

McEnany’s remarks in the clip did not age well. The U.S. has reported more than 28.4 million cases and 508,107 deaths linked to the coronavirus since last year, according to the New York Times.

“This president will always put America first,” McEnany said in the video. “He will always protect American citizens.”

Since McEnany’s predications were wildly inaccurate, Twitter users marked the anniversary by mocking her.

Users on Twitter were quick to point out that even during this time last year, there were signs from the CDC highlighting the falsity of McEnany’s claim.

“Exact same day CDC Dr. Messonier warned that an outbreak was imminent, hospitals and everybody should prepare. And then was never heard from again,” one user tweeted citing a Politico article published on February 25, 2020.

“Kayleigh McEnany is a Hall of Fame liar and world class bulls**t artist. After the lie she told about coronavirus never coming to the US, nobody should ever have taken her seriously again. From start to finish, the Trump administration botched our response to the catastrophe,” another user commented.

A year after the interview, many users connected McEnany’s comment to how other members of the Trump administration acted throughout the last year of his presidency, spreading misinformation on COVID-19 to the American public.

“At times I wonder how people like her sleep at night, but then I remember they have no conscience, empathy or sense of responsibility… & it explains everything,” one user tweeted.

“But maybe now, the prospect of being unemployed is keeping them awake,” another user responded.