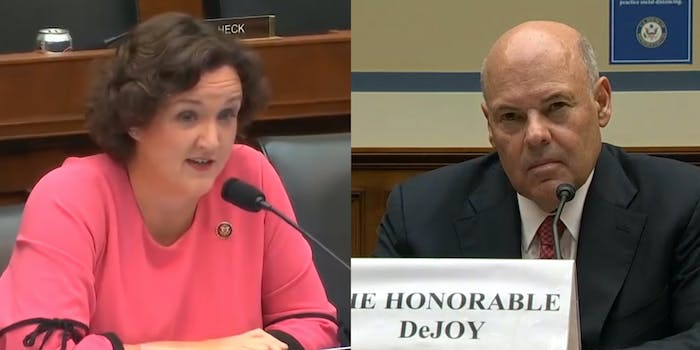 After the hearing she brought back a tweet of hers about the hearing.

Rep. Katie Porter (D-Calif.) forced Postmaster General Louis DeJoy to admit on Monday that he does not know how much it costs to do something extremely simple through the agency he oversees: send a postcard.

Porter grilled DeJoy while he testified at a House Oversight and Reform Committee hearing on Monday afternoon.

DeJoy’s tenure as the head of the United States Postal Service has come under fire as changes have raised concerns about the agency’s ability to handle a large influx of mail-in ballots come election day.

Porter began her questions for DeJoy quickly, immediately asking him what the cost was for a first-class postage stamp.

DeJoy responded quickly, saying that it was 55 cents.

Porter responded with another question, asking how much it cost to mail a postcard.

That tripped DeJoy up.

“I don’t know,” he said, tripping over a few words.

“You don’t know the cost to mail a postcard?” Porter asked.

Porter asked another question about greeting cards and stamps, specifically ones that are in a “square envelope.”

“I’ll submit that I know very little about a postage stamp,” DeJoy responded.

It costs 35 cents for postcard stamps for regular-sized, rectangular postcards, according to the USPS website.

After a few more questions for the postmaster general—including about how many people voted through the mail in the last election—Porter didn’t seem enthused by his ability to lead the agency.

“I’m concerned about your understanding of this agency,” she told him.

Porter’s questioning comes after she had warned DeJoy that he would have to come “prepared” to the House Oversight and Reform Committee hearing.

Last week, the California lawmaker quote-tweeted a news report about DeJoy’s upcoming testimony writing that “I hope the Postmaster General comes prepared. I know I will.”

On Monday, following her grilling of the postmaster general, Porter brought back her tweet and added:

“Spoiler alert: he did not.”