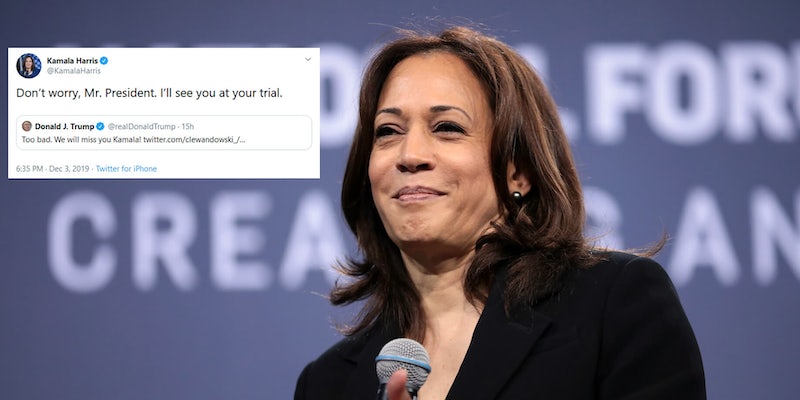 Harris was quick with her comeback.

Sen. Kamala Harris (D-Calif.) dropped out of the 2020 Democratic presidential primary on Tuesday and President Donald Trump took notice, as he has with almost every single Dem.

Harris announced in a video on Tuesday that she was ending her campaign, adding that it was “one of the hardest decisions of my life.” The California senator said the campaign did not have “the financial resources to continue.”

The president on Tuesday evening retweeted his former campaign manager Corey Lewandowski, who commented on the California senator’s decision to drop out by saying: “guess it’s not as easy as everyone thought.”

Trump added his own commentary to her decision to drop her bid to run against him in the 2020 election.

“Too bad. We will miss you Kamala!” the president tweeted.

Too bad. We will miss you Kamala! https://t.co/QQd9SiFc0y

Around 10 minutes later, Harris shot back at the mocking tweet.

Harris is referring to a trial that would occur in the Senate if the House of Representatives votes to impeach Trump.

While the House is likely to convict Trump if it comes to a vote, the Senate is controlled by Republicans, and it is unlikely to find the president guilty.