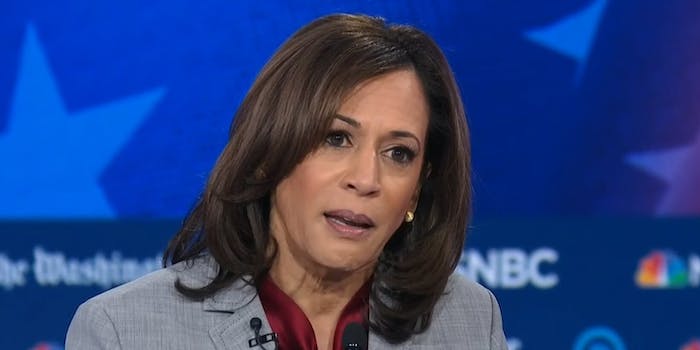 People online seemed to like the one-liner from the California senator.

2020 Democratic hopeful Sen. Kamala Harris (D-Calif.) said President Donald Trump “got punked” by North Korea when asked whether she would “make concessions” to keep talks between the country continuing.

Harris made the remarks during the fifth 2020 Democratic debate on Tuesday night.

“With all due deference to the fact that this is a presidential debate, Donald Trump got punked,” Harris said, receiving laughter from the crowd. “He has conducted foreign policy since day one born out of a very fragile ego that fails to understand that one of the most important responsibilities of the commander-in-chief is to concern herself with the security of our nation and homeland; and to do it in a way and understands that part of the strength of who we are as a nation–and therefore an extension of our ability to be secure–is not only that we have a vibrant military, but that when we walk in any room around the globe we are respected. Because we keep to our word, we are consistent, we speak truth, and we are loyal.”

When asked whether she would make “concessions to North Korea,” Harris said:

“Not at this point. There are no concessions to be made. He has traded a photo-op for nothing.”

The “punked” remark got the attention of many people online.

"Donald Trump got punked" is a great line.#DemDebate

"Donald Trump got punked." Would love to see Kamala on the debate stage with Trump.

Dam! Harris is on FIRE tonight–"Donald Trump got punked" Bahhahhahaaaahhhahahaha