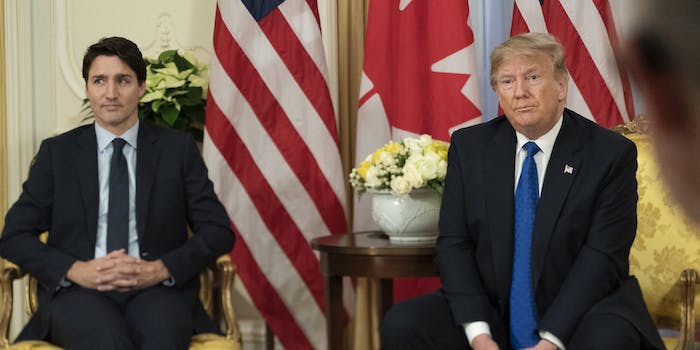 They don't mention Trump by name, but it appears they were talking about him.

A group of world leaders were caught on camera making jokes about President Donald Trump during the NATO summit in London.

“Is that why you were late?” Johnson asks Macron in the video.

“He was late because he takes a 40-minute press conference off the top,” Trudeau says. “Yeah, yeah, yeah. He announced…”

“You just watched his team’s jaws drop to the floor.”

.@JustinTrudeau, @EmmanuelMacron, @BorisJohnson and other VIPs shared a few words at a Buckingham Palace reception Tuesday. No one mentions @realDonaldTrump by name, but they seem to be discussing his lengthy impromptu press conferences from earlier in the day. (Video: Host Pool) pic.twitter.com/dVgj48rpOP

The group of leaders do not mention Trump by name in the video. However, Macron did have a meeting with Trump on Tuesday, after which he answered several questions.

Trump responded to the video, telling reporters that Trudeau was “two-faced,” according to the Washington Post.

Asked about Trudeau on camera mocking Trump with other foreign leaders, Trump fires back at the Canadian prime minister by telling reporters: “He’s two-faced.”

Trump later added that he was a “nice guy.”