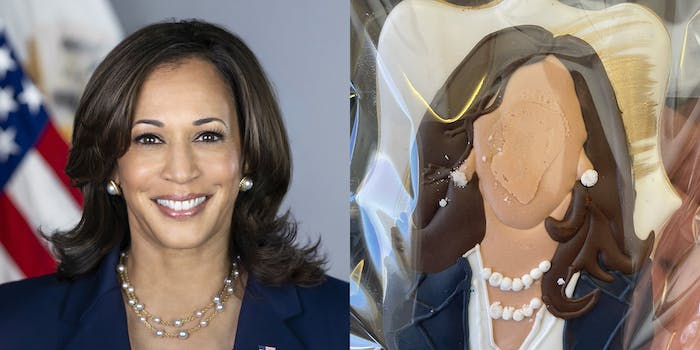 Yesterday, Vice President Kamala Harris gave something sweet to the members of the press who were flying with her: cookies shaped and decorated in her likeness.

USA Today White House reporter Courtney Subramanian inadvertently sparked the pseudo-controversy by tweeting a picture of one of the cookies.

Now Harris’s detractors on the right are freaking out about the baked goods. They’re accusing her of being a narcissist, wasting taxpayer money, and even kneading the sweet confection into evidence that the Democratic Party is a cult.

Much of the narrative conservative internet mouthpieces have concocted is based on false information. Contrary to their claims, Harris didn’t order the cookies. As several pointed out, they were a gift from a Black-owned business.

And if receiving and passing along some cookies that look like oneself proves that an entire political party is a cult, what’s it say about a political party when its members display and delightedly pose with a golden statue of a former president?

Facts seem of little consequence to those fomenting partisan hatred over some cookies.

“I never even imagined this level of narcissism. And, all on YOUR tax dollars America! Democrats, even you can’t be cool with this,” tweeted Republican congressional candidate Buzz Patterson.

The conservative anger factory kicked into high gear as news spread of ‘CookieGate’ or whatever.

In mental acrobatics not seen since a week ago, when people got mad because she wished everyone a happy three-day weekend, some accused Harris of disrespecting the troops because she handed out the cookies on the anniversary of D-Day.