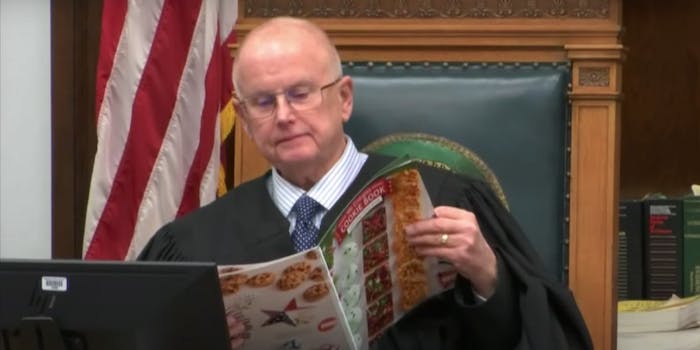 It was during a break in the trial.

An image circulating across social media on Tuesday appears to show the judge in the Kyle Rittenhouse trial reading a magazine at the bench.

In several posts on Twitter, Judge Bruce Schroeder was shown holding a “Cookie Book” amid the highly publicized court case.

“The highlight of the Kyle Rittenhouse trial BY FAR was when the judge was just casually reading a catalog to order cookies,” Twitter user David Hookstead wrote.

Numerous other users caught the moment as well, which was live streamed by media outlets across the country. Rittenhouse is currently facing five felonies and a misdemeanor for shooting and killing two men and wounding a third last year during unrest in Kenosha, Wisconsin.

Some supporters of Rittenhouse even argued that the incident was proof of the judge’s support for the defendant.

“As the prosecutor, you’ve really F’d up when you judge is reading a cookie catalog,” @TripJCrypto wrote.

While some users questioned whether the image was photoshopped, the photo is actually real. But the judge wasn’t reading during the trial. Instead, as shown in video of the court case online, Schroeder pulled out the magazine during a 10-minute break.

The judge can be seen examining the book for a little less than one minute and thirty seconds at the end of the break before allowing the trial to proceed.

Despite the judge’s interest in cookies having no bearing on the case, users continued to portray the image as a win for the defense.

“In a way, that’s another slap in the face to the prosecutors after their own witness confessed that he was guilty of attacking Kyle Rittenhouse first,” @chadabizeid wrote. “#KyleRittenhouse is innocent. George Floyd was never innocent. Get your scales right.”

Yet many users instead saw the image as nothing more than a meme, even celebrating Schroeder’s apparent interest in baking cookies.

Shortly after, the prosecution rested its case, which saw 22 witnesses called to the stand in total. Rittenhouse, who was 17-years-old at the time of the shooting, has pleaded not guilty to the charges against him.