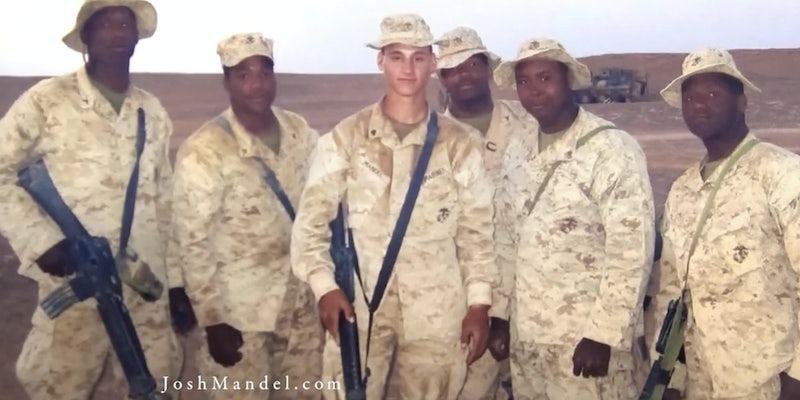 ‘He forgot to Photoshop the hands’: Did this GOP candidate insert himself into a pic of Black soldiers?

The campaign says no. The internet has questions.

Josh Mandel, a Republican candidate for United States Senate in Ohio, is in the hot seat over his latest campaign ad.

First Mandel got into a Twitter spat with Martin Luther King Jr.’s daughter, who took umbrage with him invoking her father’s legacy in the pro-gun, anti-critical race theory ad. Now he’s being accused of photoshopping himself into a photo of several soldiers who appear to be Black. (Mandel is Jewish.)

His campaign blames a darkening filter and released what it says is the original photo. The Daily Dot’s art director, Jason Reed, reviewed the photo and found the filter explanation by the campaign to be plausible. “The original photo isn’t great, and the filter likely did a disservice,” he added.

The image appears 10 seconds into the ad. In it, Mandel stands in the center flanked by the other men as he says in a voiceover that he fought “alongside Marines of every color.”

Observers swiftly honed in on the photo, specifically Mandel’s hands, which appear far darker than his face. The other soldiers’ hands also appear darker than their faces.

Twitter users also said that Mandel’s hands are much lighter in other photos. “Look at the difference in the color of his hands from two photos in his video!!!!” wrote one.

Some pointed out that Mandel is the only one with a name badge on his uniform.

This led many to conclude that Mandel photoshopped his head onto a Black soldier’s body. Again, the campaign denies it.

“Problem is he forgot to photoshop the hands that clearly show he put his face on the body of a Black soldier.”

His campaign told a Politico reporter that a darkening filter caused the difference in the colors of the soldiers’ hands and face and provided what they say is the original image.

Rather than quell the chatter, this explanation led to further questions.

“Why he felt the need for a ‘darkening filter’ … is a mystery,” opined @camorris

“So weird that the darkening filter had no effect on his face,” wrote another.

“I’ve worked in tech for over 10 years, including working with Photoshop and multiple video editing applications,” wrote @LadyJayPersists. “His claim is BS.”