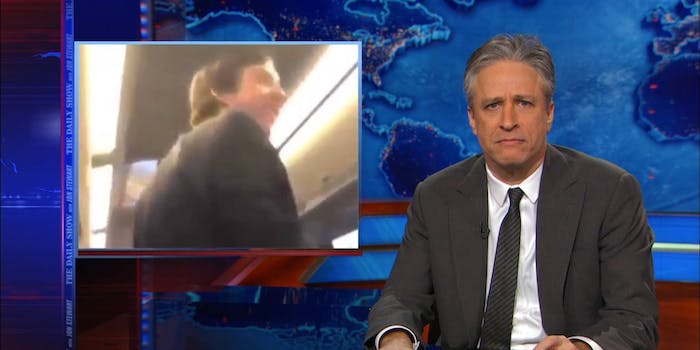 Jon Stewart is disgusted by conservatives’ response to racism at fraternities

Why does everyone blame the individual instead of the bigger problem?

It said a lot to Jon Stewart that the first apology in the wake of the University of Oklahoma’s racist chant video came not from the men who were leading the chant, but from an Oklahoma linebacker who said he regretted cursing in his reaction to the chant.

Much of the country has been discussing Sigma Alpha Epsilon‘s offensive video, something that former members say is not an isolated incident. The discussion about racism is particularly resonant in the wake of the 50th anniversary of the Selma marches. Some, including many in the media, have been looking for something to blame.

Morning Joe hosts Mika Brzezinski and Joe Scarborough somehow managed to blame black people after discovering that rapper Waka Flocka Flame canceled a concert at the University of Oklahoma after the video went viral. On The Daily Show on Wednesday night, Stewart railed against the MSNBC hosts’ twisted logic, saying it highlighted a broader problem with how we talk about racism.

“How come when conservatives talk about African Americans, they say, ‘These people need to take responsibility for themselves, pull up their pants, get a job,'” Stewart asked, “but when white people do something racist, they’re all, ‘Well, you can’t blame them, how could those poor children know wrong from right after being driven to madness by the irresistible power of the hippity-hoppety’?”