The viral video of University of Oklahoma fraternity brothers singing a racist chant has inspired a lot of discussion, but until Wednesday morning, no one had been able to magically shift the blame onto someone other than the Sigma Alpha Epsilon members who spewed the racism.

The rapper was scheduled to perform at UO, but he cancelled in the wake of the video’s release, saying that he was “disgusted in the actions of SAE.”

When Brzezinski heard that, she said on Morning Joe, she listened to the rapper’s music and realized that he was the real culprit was in this situation.

I look at his lyrics, and I’m thinking, why wouldn’t you ask this guy, why would you go on this campus, and if you look at every single song I guess he’s written, it’s a bunch of garbage. It’s full of n-words, it’s full of f-words. It’s wrong. And he shouldn’t be disgusted with them, he should be disgusted with himself. That’s all I have to say.

The show’s commentators all agreed with Brzezinski’s assumption that, because rappers sometimes curse, frat bros should feel free to create racist chants. 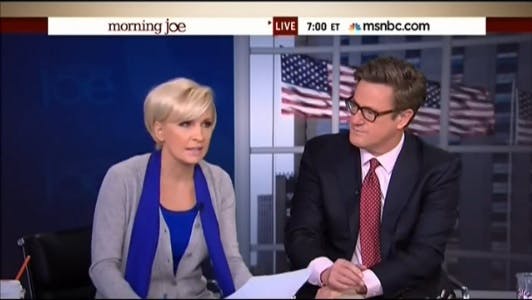 Mika Brzezinski thinks she has the answer.

Scarborough then took it one step further, referencing a bizarre (and extremely questionable) statistic about the hit Fox series Empire:

Anybody who watches Empire knows that 70 percent of the audience is white! The kids that are buying hip hop or gangster rap as Mark [Halperin] wanted us to call it, it’s a white audience, and they hear this over and over again. So do they hear this at home? Well, chances are good, no, they heard a lot of this from guys like this who are now acting shocked.

Thankfully, Today co-host Willie Geist was there to explain to the panel that rap songs and old racist chants passed down from generation to generation through all-white clubs were two entirely different things. God bless Willie Geist and god bless rap music.