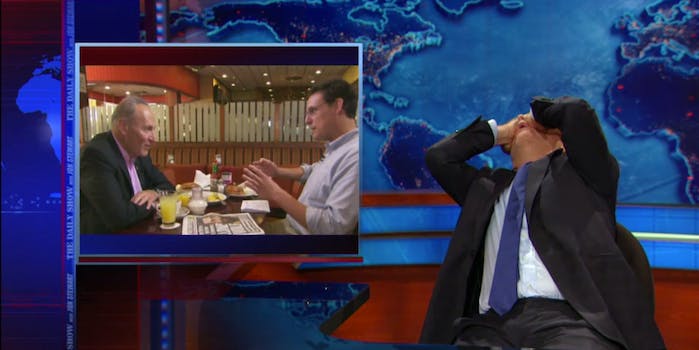 You have to admit, he knows a thing or two about diners.

Sen. Chuck Schumer (D-N.Y.) will be key to protecting President Obama‘s Iran nuclear deal in the Senate, but in trying to explain it on MSNBC, Schumer might have discovered his one true weakness.

The interviewer had good intentions. He took Schumer out for breakfast, something that can energize anyone at the beginning of the day. But then the breakfast’s setting was revealed—a New York City diner—and Jon Stewart, commenting on the interview on The Daily Show, was distraught.

And he was right. Diner talk was the only thing on Schumer’s mind, which simultaneously frustrated political junkies and gave diner enthusiasts some great ideas to improve their brunches.

After all that breakfast talk, Schumer finally admitted that he hadn’t even read the text of the Iran deal yet. Think of all the things that were never accomplished because two people went to a diner to brainstorm about them.