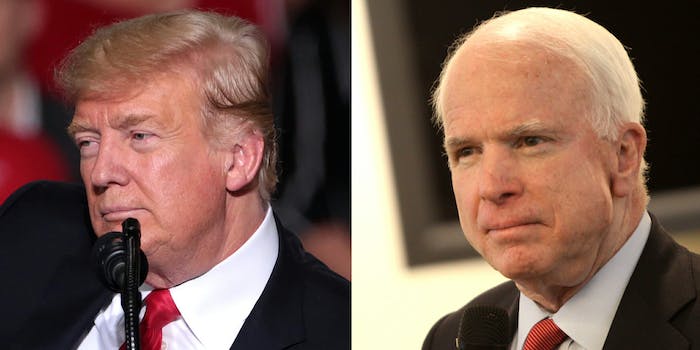 #JohnMcCainDay is the new way to troll Trump on his birthday

The hashtag was trending early Friday.

The hashtag was trending on Friday morning, the president’s 73rd birthday. He started it off by doing an early morning interview on Fox & Friends.

The hashtag appears to have been started by Andy Lassner, the executive producer of the Ellen DeGeneres Show in a tweet where he called on his followers to celebrate the president’s birthday by using the hashtag, according to HuffPost.

In the tweet, Lassner says he was “sure this would mean a lot to patriot like Donald Trump.”

A few hours later Lassner posted a screenshot of #JohnMcCainDay trending on Twitter.

Trump and McCain publicly sparred before the Arizona senator died in August last year. As Newsweek notes, a Change.org petition to change June 14 to John McCain Day was started five days ago.

The hashtag caught on, with a lot of people using it to mock Trump.

I refuse to celebrate a draft dodger today. Instead today will be #JohnMcCainDay.